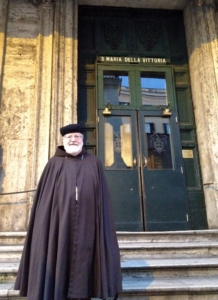 As I mentioned in my last post, I spent much of this week in Rome for meetings with the Holy Father and the consistory for the creation of new cardinals.

On Friday (2/17), the day before the consistory, he called the cardinals together to reflect on the theme of the New Evangelization and the Year of Faith. Talks were given by Cardinal Timothy Dolan of New York and Archbishop Rino Fisichella, who is the new president of the Pontifical Council for the New Evangelization. It was an opportunity for dialogue with the cardinals and we prayed Midday Prayer and Vespers together with the Holy Father. At the end the Holy Father shared with us some of his reflections. It was a very moving experience to be together with the Holy Father and the other cardinals. Cardinal Dolan gave a very good intervention, talking about the new evangelization, and Archbishop Fisichella spoke about the plans of the pontifical council for the Year of Faith and going forward. On Saturday (2/18), we celebrated the consistory in the morning using the new rites, which involved giving in one ceremony the biretta, ring and titular church that the new cardinals receive. Of course among them were Cardinal Edwin O'Brien, who up until now has been Archbishop of Baltimore, and is now heading the Order of the Holy Sepulcher and now will reside in Rome; and Cardinal Timothy Dolan, who is the Archbishop of New York and currently the president of the U.S. Conference of Catholic Bishops. At the end of the ceremony we were very happy to hear the announcement of new canonizations, including Blesseds Kateri Tekakwitha and Mother Marianne Cope. That afternoon, there was a reception at the North American College to honor our two new American cardinals. In the evening, there was the traditional blessings and greetings by the new Cardinals.

On Ash Wednesday I celebrated Mass in my titular church, Santa Maria della Vittoria. I was very happy to have Deacon Eric Bennett and seminarian Thomas McDonnell accompany me, along with Msgr. Steve Avila. During my stay, we were also able to meet for dinner with two priests of the archdiocese or currently in Rome studying, Father Richard Mehm and Father Kevin Toomey, who are here for the semester. They are studying at the Institute for Continuing Theological Education run by the North American College. In addition, the consistory coincided with the visit of Father Bill Dunn to Rome, who joined us for dinner there.

Rite of Election in Boston

I would like to finish my post today asking you all to pray for the candidates and catechumens who are preparing to enter into full communion with the Church this Easter. We will be gathering with them on Sunday at the Cathedral of the Holy Cross in Boston, where we celebrate the Rite of the Election and Call to Continuing Conversion. In a time when our Church can seem marginalized, and even despised by some, it is always inspiring to see so many people anxious to share our Catholic faith.