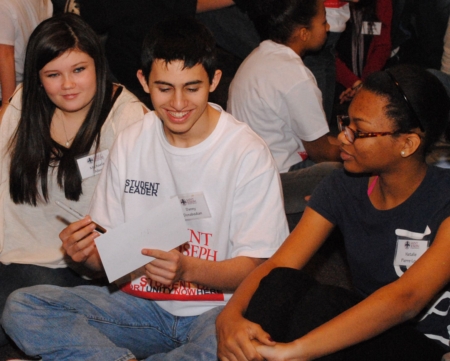 BRIGHTON -- A brand new Catholic school with a long, rich heritage and history, opens its doors in the fall.

But how can a new school have a rich history? When St. Joseph Preparatory High School opens in September 2012 at the site of the present Mount St. Joseph Academy at 617 Cambridge Street, Brighton, the new school starts with history from both schools.

St. Joseph Preparatory High School developed from the unification of Mount St. Joseph Academy in Brighton, and Trinity Catholic High School in Newton. These schools have served Newton, Brighton, and the surrounding communities for a combined total of almost 250 years.

"The school is poised to educate young women and men who seek to become fully human, compassionate leaders and globally aware and responsive citizens," Joanne Gallagher, CSJ, director of communications at the new school, said in a statement.

Students and faculty of the new school gathered at Boston College on Feb. 6 for a day of community building activities. During the morning, 56 student leaders led activities and encouraged students from the two schools in the first phase of the process of becoming one school.

Student responses to becoming a new school included the hope for expanded athletic offerings and clubs, recognition of a chance for new educational opportunities, and the desire to carry traditions of both schools into the new school.

"I'm getting more comfortable and confident. My eyes have been opened to educational opportunities and not just sports," Michael, a junior at Trinity Catholic said.

"All our ideas are coming together as one school instead of two," he said of the day at BC.

"I was worried but now I'm excited because it's a new opportunity. The change is good as long as we stay positive," she said.

"We are much more the same than different," she added.

"This transition was hard to take in all at once; but activities like today are unifying the school. I'm excited for the upcoming year because we're honoring the traditions of both schools," Jasmine, a junior at Mount St. Joseph said.

At the BC event, students voted for the image of the phoenix, a bird which symbolizes renewal, as the mascot of the new school.

Mount St. Joseph Academy was founded in 1885 under sponsorship of the Sisters of St. Joseph of Boston and enrolls 200 girls.

Founded in 1893, Trinity Catholic High School has been staffed during its 117 years by both Sisters of Charity and Sisters of St. Joseph.

Affiliated with Our Lady Help of Christians Parish in Newton, Trinity Catholic currently serves 200 boys and girls. Together these schools employ approximately 60 teachers and support staff.