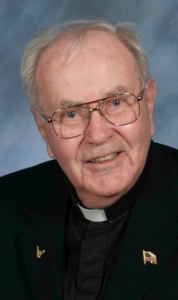 Father William C. Burkhart, who could rightly be called the "father of the permanent diaconate in the archdiocese" and who served as pastor of parishes in Medway and Belmont died at Regina Cleri in Boston on Feb. 15.

Born in Boston son of the late Nicholas and Agnes (O'Brien) Burckhart he was raised in Quincy at Sacred Heart Parish. After attending local schools, he subsequently enrolled at Boston College High School and graduated in the class of 1945. He continued his Jesuit education at Boston College graduating in the Class of 1949. He entered St. John's Seminary and on Sept. 29, 1953, having completed seminary studies, Archbishop Richard Cushing ordained him to the priesthood at Holy Cross Cathedral.

With the revival of the permanent diaconate initiated by the Second Vatican Council in the middle '60s, the opening up, once again, of this ministry to both married and single men, became a hallmark of the Council. The program for formation began in the archdiocese in 1972 with Father Burckhart as the first director. He held that position until 1979; during that time, he saw several of the first classes of his students ordained to the permanent diaconate as well as set the foundational program for their formation. In March 1975, he assumed the additional responsibility of Administrator of Holy Trinity (German) parish in Boston's South End.

Following his retirement he lived in Westwood first in his own residence and then at St. Denis Rectory. Just a few months ago, health concerns required his move to Regina Cleri. While retired he continued to assist in several parishes.