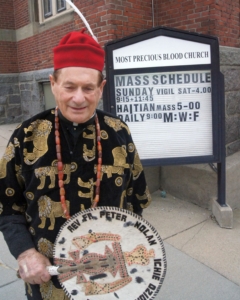 Father Peter Nolan, CSSp, pastor of Most Precious Blood in Hyde Park, wears traditional clothing and holds the ceremonial wand given to him when elders made him a chief in the town of Nimo, Nigeria last December for his work there in the 1960s. Pilot photo/Christopher S. Pineo

BOSTON -- In the darkness of a war that would claim an estimated three million lives, one Catholic priest kept the light of Christ burning in a parish through war-torn years in Nigeria.

The pastor of Most Precious Blood in Hyde Park Father Peter Nolan, CSSp, visited the Parish of the Assumption in Nimo, Nigeria, where from 1961 to 1969, over the course of two four-year stays, he helped build and sustain the parish even through the worst possible circumstances.

"The presence of God for some reason in the midst of suffering was greater than ever," Father Nolan said, recalling his work as a missionary.

In recognition of the accomplishments of his ministry there 50 years ago, elders and tribal leaders made Father Nolan an honorary chief of the Ibo tribe at a ceremony on Dec. 31 celebrating the 100th anniversary of the arrival of the first missionaries in the town of Nimo.

"I was overwhelmed with the way I was received. It was very touching," Father Nolan said.

After being installed as a chief of the town, under the name Ichie Ozioma I of Nimo, which translates "elder of the Gospel message" with the "I" meaning "the first," elders brought him through the town so each household could present him with a traditional chicken and yam, given whenever a person becomes a chief.

Father Nolan, a native of Dublin, Ireland, said he had no particular desire for a flock of live chicken, but knew he could not refuse the gesture.

At one home he said, "Look, I dispense you from bringing that chicken."

The local objected. "Oh no, Father! You can't! That's our culture! You can't do that. You must take the chicken," he said.

Father Nolan recalled his work during the difficult time in Nigerian history that led to the honor.

From 1961 to 1965 Father Nolan served as a missionary in Nimo, after becoming a Holy Ghost Father in Ireland.

He first went to Nimo before the bishop sent him to travel through the area of Aguleri in southeast Nigeria.

"We would spend a night in each village in camp beds baptizing and instructing," he recalled.

He then went back to Nimo and served as pastor, before heading home to Ireland for six months.

On his second trip to Nimo from 1965 to 1969 the tide of war rose around the parish and the seven Catholic school buildings where he preached, penetrating even the safety of his home.

"Sometimes looking back I would say to myself, 'How did I do it?'" he said.

In 1967 the Republic of Biafra tried to break away from the African country of Nigeria. The ensuing war lasted until 1970.

As the war raged Father Nolan continued celebrating Mass every day at Catholic schools in the area even though the conflict saw the church shelled twice.

"My mission house, the rectory if you like, was strafed with bullets numbers of times. It's a miracle I wasn't shot," he said.

In the final stages of the chaotic war -- which saw prop-plane air forces flying against airfields of jets -- the area near Nimo became the front line of the war.

"At times I cried, you know. There were times when I would see all these babies and mothers with the babies dying in their arms, and that inspired and struck me. So I would say, 'God, can you help me?' You didn't know where to turn, but you would turn to God," Father Nolan said.

The situation got worse before it got better, and Father Nolan said the greatest problem near the end of the war became starvation and a disease called kwashiorkor, causing a swollen belly from lack of protein.

Father Nolan said the people banded together to help one another as 100 women helped him run ten make-shift facilities with food sent from Catholic relief organizations to feed the 10,000 refugees in the area.

"The people inspired me too, because they were all turning to God. God became a big part of our life in the midst of starvation and suffering," he said.

When starvation began claiming the lives of the poor caught between the armies, Father Nolan began a program to take babies from the Nigerian countryside to West Africa.

One man who currently lives in Texas, came to see Father Nolan on his trip to Nimo in December and January.

"He said, 'I was one of the babies that through you was sent to Gabon," Father Nolan recounted. Gabon was a former French territory in West Africa.

Today, Nimo has 13 parishes that live now in relative peace, but Father Nolan said it is the time of hardship in those years that he still recalls in his homilies.

"The thing I have often said to people is that I have never sensed the feeling of God, strange as it might seem, as in that particular era," Father Nolan said. 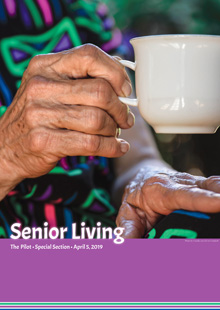