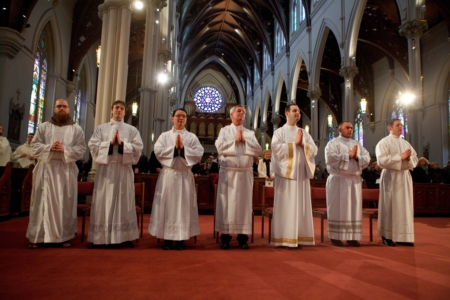 BOSTON -- At the Cathedral of the Holy Cross Cardinal Seán P. O'Malley ordained to the diaconate five candidates for the Archdiocese of Boston, one for the Diocese of Springfield, and one for the Oblates of the Virgin Mary, on Jan. 21.

"Of course in the Church's way of preparing men for priestly ministry part of the itinerary is to be deacons. So, this celebration today puts them on that journey to priesthood, even closer, and underscores the fact that ministry is about service, about answering a call to serve the Lord, and the poor at the altar, and to be at the service of the word of God," Cardinal O'Malley said.

Adrian Milik's parents could not attend the ordination, but his brother came to support him at the church.

"I'm really proud of my brother because he is a really great individual, and he is really willing to share, and this an important step for him to be able to really give himself to the community," said Oscar Milik.

Speaking with The Pilot after the ceremony, Healy -- a widower -- said he loves his deceased wife, Jesus Christ, and the Lord God.

"With those three behind me, I will be OK the rest of my life," he said.

"We are very, very pleased that these men where ordained deacons today. We look forward to their priestly ordination in a few months," the cardinal said.