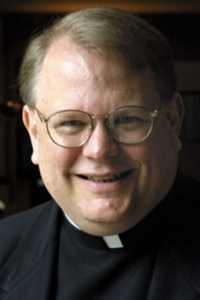 Bishop Kennedy will be leaving St. John's to assume the position of Episcopal Vicar for the New Evangelization.

Ordained in 1980, Msgr. Moroney, has served as a priest of the Diocese of Worcester for the past 32 years. Currently professor of Sacred Liturgy at St. John's Seminary, he also serves as executive secretary of the Vox Clara Committee, an international committee that advises the Vatican on the English translation of the liturgy.

Msgr. Moroney previously served as rector of the Cathedral Church of St. Paul in Worcester, pastor of Mary Queen of the Rosary Parish in Spencer and as executive director of the U.S. Conference of Catholic Bishops' Secretariat for the Liturgy.

"I am very grateful to Cardinal O'Malley for his confidence in me and particularly honored to succeed Bishop Kennedy, who has revitalized and strengthened St. John's Seminary in an extraordinary way over the past five years,'' Msgr. Moroney said.

After seminary studies at the North American College, he pursued graduate studies at the Pontifical Gregorian University, the Pontifical Liturgy Institute at St. Anselmo's and the Catholic University of America. A past chairman of the Federation of Diocesan Liturgical Commissions, Msgr. Moroney served as Executive Director of the USCCB Secretariat for the Liturgy from 1996-2007.

Msgr. Moroney is a frequent lecturer on liturgical matters, having addressed close to more than 20,000 priests and deacons in recent years at the invitation of more than a hundred bishops. He is also author of the recently revised "The Mass Explained: An Introduction to the New Roman Missal" and host of "The New and Eternal Word" program on the CatholicTV Network.

Cardinal O'Malley expressed his gratitude to Worcester Bishop Robert J. McManus for his willingness to release Msgr. Moroney for this important work.

"He has been and continues to be a wonderful resource to our diocese in liturgical matters and also for his pastoral acumen," said Bishop McManus, also a member of the Board of Trustees for St. John's Seminary.

"I am confident that he will bring a vision of the priesthood to his seminarians that will prove to be a great blessing for all our dioceses which utilize this seminary for years to come," Bishop McManus added.

"I am filled with joy at being called to pastor these future shepherds of the Church. They are men filled with a burning desire to give their lives to Christ and his Church, and characterized by that hope which opens hearts to the will of God," Msgr. Moroney said.

The cardinal expressed his confidence that Msgr. Moroney would bring "his extensive experience in teaching priests and seminarians throughout the United States to the work of promoting the service of St. John's Seminary to the bishops of New England and, indeed, the Catholic world. His longstanding work for the Holy See and the bishops of our country has prepared him in a wonderful way for his new role as rector of the seminary community."

St. John's Seminary was founded in 1884 and today prepares seminarians for 12 dioceses and five religious communities. As a result of unprecedented growth, the number of seminarians at St. John's has tripled in the past five years and it is presently full.

"I look forward to seeking the wise counsel of Bishop Kennedy, our wonderful faculty, and the priests of the archdiocese in the coming months as we prepare to build on the great foundation established by the 19 rectors who have gone before me,'' Msgr. Moroney said.