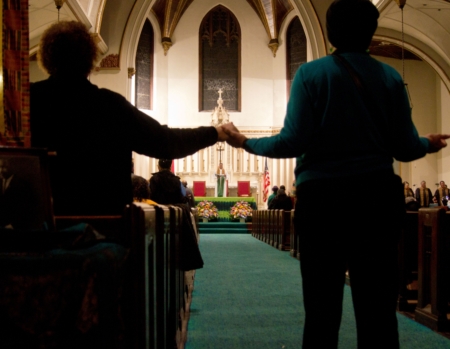 DORCHESTER -- The archdiocese's Office for Black Catholics hosted an event to honor the legacy of Martin Luther King Jr. with an Evening of Prayer and Song at St. Katherine Drexel Church, Jan. 15.

Father Oscar Pratt, parochial vicar at Holy Name in Boston, presided and gave a homily for the prayer service.

In his homily, Father Pratt said people might be tempted to think they had done enough honor to King's legacy by attending the prayer service.

The priest instead called the audience to action beyond simply remembering.

The crowd responded with a spontaneous Amen.

"Amen! If two or three can move nations, then let me tell you what all of us can do if we put our minds, our energies, our hearts, and our spirits in front," he said.

The homily also stressed that although God had a concrete role and plan for Martin Luther King, he "wasn't Jesus, Dr. King wasn't the Messiah. But I'll tell you one thing: he knew him."

Father Pratt ended his homily with an unscheduled singing of "We Shall Overcome," which was joined by the choir and assembly.

"It was extremely overwhelming. It was a really overwhelming feeling, because often-times we just hear excerpts of Dr. King's speeches," Monette Jr. said of standing in the shoes of one of the great social-justice leaders of our age.

In the speech read, the words of King addressed the problem of poor people spending beyond their means.

"If we think about the meaning of remembrance scripturally, to remember means to make present. I think, it is important to make his message present so that we continue to act on it," said Father Gerald Osterman, administrator of St. Katherine Drexel Parish, who attended the prayer service.

Meyer Chambers, director of The Archdiocese of Boston Black Catholic Choir, noted the significance of King's message in today's world.

"It is the choir's anniversary every time," he said.

The following day, Jan. 16, St. Katherine Drexel Church hosted the Red Cross for a blood drive in the church hall. Held each year since 2003, the blood drive is seen as another way to honor King's memory by giving the gift of life.