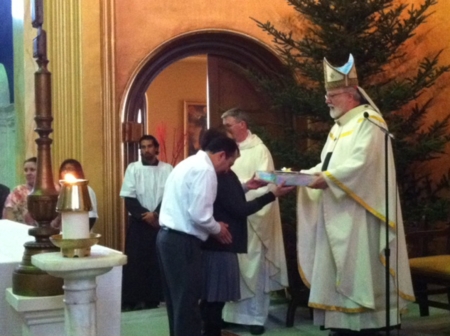 'I was very happy to join with St. Mary Parish in Waltham for their celebration of the Epiphany... Afterward, I celebrated the Mass in Spanish.' Pilot photo/CardinalSeansBlog.org

In the cathedral we are blessed to have a community of Ge'ez Catholics and it was a joy to be with them for their celebration of the Epiphany last Friday (1/6). The Ge'ez Rite is something like the Catholic counterpart of the Coptic Church and the parishioners who comprise that community are Ethiopians and Eritreans. That in itself is, I think, a great witness to the faith: that despite the tensions that exist between those two nations, Catholics can come together to worship in communion. The celebration is very long and elaborate and there are a number of aspects that might seem unfamiliar to a Latin Rite Catholic. For example, the Mass was almost four hours, starting around 8:30 at night and continuing until after midnight. When they distribute Communion, it takes a whole team of people to do it, because one person is ringing a bell, another is holding an umbrella, another is holding a candle, another has the paten, and yet another person the chalice. The women and men also sit separately in the chapel.

The local Ge'ez community recently started their choir here in Boston. The numbers have grown over the past year, which I feel very happy to see. After the Mass, they sang Christmas Carols, danced and played drums. We are so pleased that this community is part of the Cathedral parish family and their presence enriches the Church in Boston.

In the United States, we transfer the celebration of the Epiphany to the Sunday. So, the Epiphany in our Latin Rite parishes fell on Sunday, January 8, rather than January 6, as in the Ge'ez Rite. I was very happy to join with St. Mary Parish in Waltham for their celebration of the Epiphany. I went to the English Mass to greet them, give a brief talk, and to congratulate them on the 175th anniversary of their parish, which they recently celebrated. Afterward, I celebrated the Mass in Spanish. After the Spanish Mass, the parishioners presented a play about the three kings. It was wonderful to see the church was packed for that.

Gathering with the Faber Community

On Sunday (1/8) evening I gathered with the Jesuits of the Faber Community at Boston College as they began a three day retreat before the start of the second semester at the B.C. School of Theology and Ministry. The community is made up of 72 Jesuits from 30 provinces throughout the world, all gathered in Boston for religious formation and graduate studies.

The retreat was organized by Father Brad Schaeffer, S.J., rector of the Faber community, and Father Tony Corcoran, S.J., who is in the midst of an assignment in Moscow and took time to come and help with the retreat. Father Tony had no problem enjoying our recent mild weather during his visit! After leading evening prayer for the Jesuits, we gathered for conversation and dinner. I was impressed with the depth and breadth of their experiences and their commitment to the work of the Church. I shared with them that in the archdiocese we are blessed by the presence and assistance of so many Jesuit priests and scholastics. It was a wonderful evening that provided great encouragement for the future. At dinner, Father Tony presented me an icon he had brought from Moscow, a beautiful rendering of our Blessed Mother. It will be given a place of special dignity at the cathedral.

On Thursday (1/12), I met with Cathy Brenti, who was visiting her son, Vincent, who is here studying in Boston. Cathy and her husband are leaders in the Community of the Beatitudes. Cathy was very instrumental in helping arrange to bring the relic of the Cure d'Ars, the patron saint of priests, to Boston. She was also very instrumental in organizing the retreat to Ars during the Year for Priests, which was attended by a number of priests from Boston. I had never been to Ars, so it was a wonderful experience. There were about 1,400 priests there from all over the world at that retreat.

Also during Christmas, I always try to visit with Greek Orthodox Metropolitan Methodios. I was very pleased to join him for dinner, along with Father Ted Barabas, their chancellor. During the evening we had a wonderful conversation. I always look forward to my visits with the Metropolitan and the opportunity to continue to build the relationship between our two great Churches.