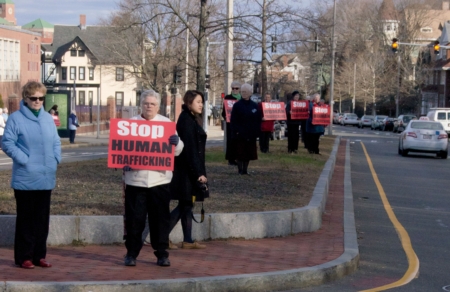 Participants in the Jan. 8 prayer vigil sponsored by the Anti-Trafficking Coalition of the Boston unit of the Leadership Conference of Women Religious display signs to passing motorist outside the Sisters of St. Joseph's motherhouse in Brighton. Pilot photo/Christopher S. Pineo

BRIGHTON -- At their motherhouse in Brighton, the Sisters of St. Joseph hosted Catholic women religious from the Greater Boston area, activists, and others for a prayer vigil against human trafficking in the Boston area and the world.

The Anti-Trafficking Coalition of the Boston unit of the Leadership Conference of Women Religious estimated that 125 people came to the Chapel of the Sisters of St. Joseph Motherhouse for the vigil on Jan. 8, as they commemorated the first Sunday before National Human Trafficking Awareness Day on Jan. 11. As a large group arrived for the event, sisters ran out of the 100 programs they printed for the vigil.

"There are some faithful who come year-after-year, but each year we see new faces, which is very exciting," Sister Mary Lou Simcoe, SUSC, said.

The sisters and participants met in the chapel of the motherhouse in Brighton, where they shared prayers, welcomed one another, and organized before a half-hour vigil on Cambridge Street.

"We are very, very thankful for your presence today. We are here to be publicly standing for the poor slaves of today in their struggle for justice," Sister Ellen Powers, CSJ said, in her welcome.

As the group moved into the street, they carried a banner and signs as they spread quietly to both sides of the street and onto the median strip. Women religious from 10 other congregations joined them according to Sister Marilyn McGoldrick, CSJ.

"I was very excited about the wide range of people. There was just such a variety. That was very exciting for me that there are that many people who are that committed that they would come out," she said.

Kanlaya Thabtim, a senior at Fontbonne Academy, came to the vigil as part of her work studying social justice for her senior project. She became interested in the subject of human-trafficking when a friend of hers became a victim of trafficking in Thabtim's native country of Thailand.

She said knowledge of human-trafficking could be dangerous, "but if you know it, and you did not say anything it would be so unfair for the victim."

After a prayer bell called participants to end the public vigil, they returned to the chapel for prayers, reflection, and readings relating the experiences of victims.

In one prayer in the chapel, participants prayed for human-traffickers to see the error of their ways.

"We want them to change. Our God is a very merciful God, a very forgiving God, but you have to change your ways," Sister Ellen told The Pilot afterward.

The participants also offered up a prayer of thanksgiving for the recent passage of the new law "An Act Relative to the Commercial Exploitation of People," strengthening protections for victims of human trafficking and prostitution and increasing the punishment for offenders by carrying a potential life sentence for traffickers of children in Massachusetts.

"It is a fairly comprehensive law, and that is to the credit of our legislature who have worked a long time on it," said Sister Mary Lou.

Sister Carole Lombard, CSJ, said she appreciated that Sen. Mark Montigny publicly thanked the sisters for their prayers when the legislation passed six years after he wrote and introduced it.

"We did a lot more than pray. We did pray, but we also did a lot of advocacy for the bill," Sister Lombard said. Sisters spoke before the Department of Children and Families on Beacon Hill, during the process of passing the bill, as part of that advocacy.

Sisters at the vigil told The Pilot that people experience the crime of trafficking locally.

"It is a very real problem in the world, but we can't say it is just over there. It's right here on this very street where we live," Sister Ellen said.

With an estimated 850,000 people trafficked annually all over the world and 20,000 trafficked into the United States, Catholic women religious continued combating the problem since the U.S. Conference of Catholic Bishops gave the issue priority in 2003.

The Anti-Trafficking Coalition first met in 2007. In the last three years the group sponsored three symposia, with over 200 participants at each, to combat modern-day slavery.

The sisters followed through on an action-plan creating the vigil to raise awareness. The coalition also scheduled a symposium for May 6 of this year.

"The human dignity of the trafficked victims is not being acknowledged at all, so it is the most evil form of slavery that can exist," Sister Ellen said. "As Christians we have an obligation to do something about it. So, we are striving to raise awareness and then create action-plans."