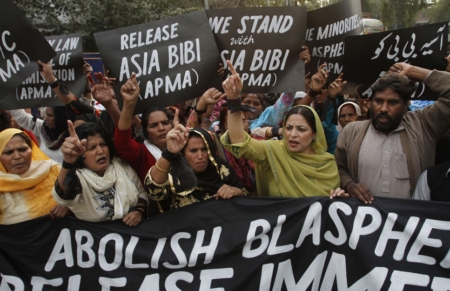 Protesters hold up placards while demanding the release of Asia Bibi, a Pakistani Christian woman who has been sentenced to death for blasphemy, at a rally in Lahore last November. CNS photo/Mohsin Raza, Reuters

A recent survey has indicated something that should lift the hearts of Christians everywhere, namely, that the fastest growing religion on the planet is Christianity. This explosive growth is on particularly clear display in Africa and Asia, where churches and seminaries can't be built fast enough to accommodate the need. It is especially important that we in the West become cognizant of this state of affairs, for with the rise of secularism and the fall-off in church attendance in Europe, Canada, Australia, and America, we can far too easily assume that Christianity is in a state of permanent decline. Au contraire, in point of fact.

But other studies carry the dark truth that the fastest-growing religion in the world is also the most persecuted. Again, this might surprise many in the post-September 11th West, who presume that Islam is the religion most in danger and hence most in need of special protection. But all over the world, and particularly in Asia, Africa, and the Middle East, Christians are, by far, the most threatened religious group. Indeed, Vatican research shows that 75 percent of those killed around the world for religious reasons are Christians.

Who can forget the horrendous attack on a Catholic Church in Baghdad last fall? Islamist militants burst into the church while Mass was in progress and proceeded to open fire indiscriminately on men, women and children. As they finished up their grisly work, the killers found themselves trailed by a toddler who asked plaintively, "Why are you doing this?" In time, they turned on the child and killed him. In the wake of that assault, huge numbers of Catholics and other Christians left their country.

Estimates are that in the last ten years somewhere between 600 thousand and one million Christians have been forced to flee Iraq. In Saudi Arabia, no Christian is allowed to worship publicly, and no church of any kind can be built. Many were cheered by the "Arab Spring" which saw the expulsion of dictators from Libya, Yemen, and Egypt and the shaking of the Assad regime in Syria, but Christians in those countries are far from encouraged. The secularist proclivities of the dictators at least allowed for a rough toleration of non-Islamic religions; thus the collapse of the tyrants has made possible the tyranny of the Islamic majority, resulting in an aggressive campaign against Christianity.

Just a few weeks ago, Egyptian Copts -- members of one of the oldest Christian communities in the world -- were publicly assaulted in the streets of Cairo by representatives of the Islamic Brotherhood. The Wall Street Journal recently reported that an Egyptian Christian mother of two young girls was blithely informed by her Muslim physician that, according to the prescriptions of Sharia law, her daughters would have to be circumcised. Convinced that the government would no longer protect them, mother and children fled the country.

Just days ago, Nigeria's president declared a state of emergency in sections of his country, due to a series of unprovoked attacks on Christian churches. Boko Haram, a militant Islamist sect, has claimed credit for the assaults, including attacks on Christmas day that left 42 people dead.

One of the most troubling stories of Christian persecution comes out of Pakistan, where fierce anti-blasphemy laws are in effect. A Christian woman named Asia Bibi was imprisoned on trumped-up charges of speaking against the prophet Muhammad. Despite protests from around the world, she was tried, convicted, and sentenced to death. Currently she languishes in prison, awaiting her execution and praying for her jailers.

Now God knows that Christians have far from a spotless record when it comes to tolerating religious diversity, but the fact remains that as the year 2012 commences, Christians are, by far, the most victimized religious group in the world. From Pakistan to Nigeria, from Egypt to Iraq, ordinary Christians routinely risk their lives simply by declaring their faith and worshiping according to their lights. They are walking in the footsteps of great martyrs of the tradition, from Stephen, Peter and Paul to Charles Lwanga and Edith Stein.

And this leads me to declare persecuted Christians as people of the year.

At this point, I will make a confession. This reflection was prompted by a piece published by the editors of the National Catholic Reporter. In their lead article, they declared Sister Elizabeth Johnson, a theologian from Fordham University, as the "person of the year" in the Catholic Church. What was the reason for this designation? Sister Johnson, they explained, had been unfairly "persecuted" by the bishops of the United States who dared to question the theological integrity of one of her many books. The bishops did not excommunicate Sister Johnson, or strip her of her teaching position or declare her not to be a Catholic theologian. They simply were critical of aspects of one of her books. And for this, a tenured professor at Fordham, a woman lionized by the academic establishment, is declared a persecuted victim.

Give me a break.

The nineteen-seventies era narrative of brave progressive theologian fighting against the repressive church is tired and utterly un-illuminating. Far more compelling is the story of the truly brave souls who are risking livelihood, life, and limb in order to declare their faith in Jesus Christ.

Father Robert Barron is the founder of the global ministry, Word on Fire, and the Francis Cardinal George Professor of Faith and Culture at the University of St. Mary of the Lake in Mundelein. He is the creator and host of a new 10 episode documentary series called "Catholicism" and also hosts programs on Relevant Radio, EWTN and at www.WordOnFire.org.