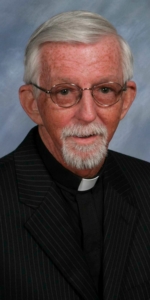 South Regional Bishop John Dooher was the principal celebrant of the Funeral Mass of his classmate, Father Nicholas J. Driscoll at St. Elizabeth Church, Milton on Jan. 10. Father Driscoll died at his home in Carver on Jan. 5; he was just a few weeks shy of celebrating his 69th birthday, which would have been Jan. 21.

A Hub native he was the only child of the late Nicholas and Phyllis (Kussmaul) Kelley-Driscoll. The family moved from Jamaica Plain to West Roxbury and Nicholas was in the first class graduated from Catholic Memorial High School, West Roxbury.

After completing formation in the archdiocesan seminaries at Cardinal O'Connell, Jamaica Plain and St. John's, Brighton, he was ordained at the Cathedral of the Holy Cross on May 21, 1969 by Richard Cardinal Cushing. This would be the last class ordained by the aging and ailing archbishop.

He was granted permanent disability status in 1999 and lived in his own residence since that time.