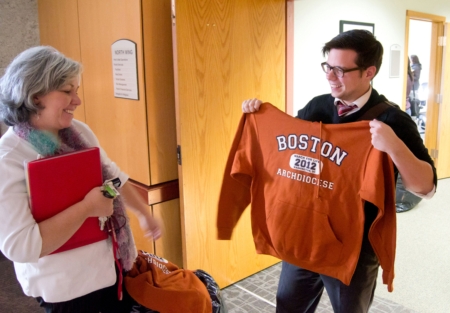 Cardinal Spellman High religious studies department head Cathy Demers and campus minister Tim Gannon pick up sweatshirts on Jan. 10 at the Pastoral Center in Braintree, a gift from the archdiocese to the 17 students from the school attending the March for Life in Washington, D.C. The Brockton students are among a Boston group of almost 500 young people attending the march this year. Pilot photo/Christopher S. Pineo

BRAINTREE -- Nearly 480 youth and young adults from the Archdiocese of Boston will join Cardinal Seán O'Malley for the annual March for Life this year in Washington, D.C.

Ten buses will leave the Pastoral Center to transport the young people to the pro-life pilgrimage on Jan. 22. Participating youth and young adults will experience daily Mass, daily rosary and chaplet of Divine Mercy. During the trip there will also be an opportunity to visit the National Basilica Shrine of the Immaculate Conception, the Holocaust Museum, the Lincoln Memorial, the War Memorials and Arlington National Cemetery.

"We are overjoyed this year at the tremendous response, and as a result of that the tremendous advocacy amongst our parishes and schools to bring young people," said Father Matt Williams, director of the Office for the New Evangelization of Youth and Young Adults.

"The leaders, and the pastors, and the campus ministers have done a phenomenal job in advocating for this march, and helping young people come to be involved in issues like this," he added

On the Sunday night before the march, there will be a special concert with Matt Maher at a rally sponsored by the Diocese of Arlington, Va. Bob Rice, an assistant professor of catechetics at Franciscan University of Steubenville, Ohio, will also be on hand.

"Both of these men are men of God, who love young people, and have a gift to be able to reach young people, and evangelize, and empower them, through song and through witness and catecheses," Father Williams said.

On the morning of Jan. 23, the day of the march itself, Cardinal O'Malley will celebrate Mass with all Boston pilgrims at the Capuchin-run Shrine of the Sacred Heart in Washington.

"We'll all be gathering to have Mass with our cardinal, and just a celebration of life before we begin the march itself," Father Williams said.

In a press release, organizers for the archdiocese said the annual March for Life draws over 400,000 people, mostly youth and young adults.

Four years ago, the Office for the New Evangelization began partnering with the archdiocese's Vocation Office and Pro-Life Office to organize the pro-life pilgrimage.

Group leaders from participating schools spoke to The Pilot following a Jan. 10 organizational meeting for chaperones at the Pastoral Center.

The mid-term schedule at Cardinal Spellman High School in Brockton prevented students from attending the march in previous years, but this year the schedule worked out so students can attend.

"So, the kids are excited. We have been praying. They really believe that they are pilgrims, and that they have a mission to fill," Cathy Demers, campus minister at Cardinal Spellman High School, said.

Several school leaders noted the large numbers of youth participating in the march this year.

"What's even more heartening is that there are so many kids who want to go, but can't. So, even if they can't come on the pilgrimage there are kids back at Spellman who are supporting our pilgrims," Tim Gannon, religious studies department head at Cardinal Spellman High School, said.

Organizers said the number of young people attending the march from the archdiocese has grown each year.

Father Williams attributed much of this growth to the leadership of Cardinal O'Malley, who was recently elected by the U.S. bishops to serve as chairman of their Committee on Pro-Life Activities.

"It is very important for the Church, and the cardinal sees this as his vision, to get the young people actively involved while they are young," Father Williams said.

Alexis McDuffee, campus ministry and theology department chair at Pope John XXIII High School in Everett, also shared excitement regarding her students interacting with the cardinal for the march.

"We have 12 students attending the March for Life from Pope John High School, and they are ecstatic and enthusiastic about attending this event, and so grateful for this opportunity to go support the culture of life with our cardinal," she said.