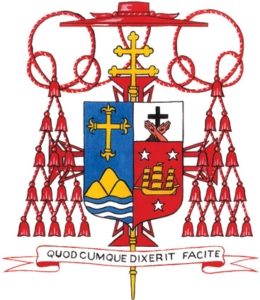 Marking the 10th anniversary of the clergy abuse scandal, Cardinal Seán P. O'Malley released a letter on Jan. 3, outlining the Archdiocese of Boston's ongoing response to the tragedy and continuing commitment to the protection of children.

In the letter, Cardinal O'Malley commits the archdiocese to a continued focus on the protection of children in the face of the clergy sexual abuse crisis of 2002.

The crisis erupted in January 2002 when a series of Boston Globe reports revealed that archdiocesan officials had transferred Father John Geoghan from parish to parish despite having received accusations that he was sexually abusing children. Subsequent reports and lawsuits exposed numerous other instances of clergy sexual misconduct with children, many dating back decades.

"We never can and never will forget our shock and revulsion at the revelations that for decades, children had been subjected to sexual abuse, devastating their lives and those of their families and loved ones," Cardinal O'Malley began the letter.

The cardinal went on to focus on the accountability of leadership within the Church.

"As leaders in the Church we must accept our responsibility for those failings and clearly acknowledge that Church leadership could have and should have responded more quickly and more forcefully," he said.

The cardinal lauded work done to ensure a safe environment for children in the Church and throughout society. He gave singular praise to those whose work helped ensure that protection programs became "always and everywhere" in Church life.

"They rightfully made clear in the earliest days of the crisis that nothing short of complete and total protection for children would be acceptable if we were to go forward together," the cardinal wrote.

Cardinal O'Malley went on to acknowledge priests for their undaunted commitment to priestly life and ministry throughout the crisis.

"We are also indebted to the priests of the archdiocese who have been and continue to be good and faithful servants to the people of God," wrote the cardinal. "Our priests have remained true to their mission and calling while carrying many burdens because of the crimes of some of their colleagues."

The cardinal restated Church commitment to upholding moral standards and civil statutes in all matters related to the safety of children.

"There is no place for compromise or equivocation concerning the welfare of children and young people," wrote the cardinal.

He committed the Church to continued and ubiquitous protection of children.

"It is my solemn pledge that at all times and in all places we will be vigilant in the protection of children, our responsibility to God and the community demands nothing less," Cardinal O'Malley wrote.

"We offer the reflections for your review and consideration," the cardinal wrote. "They are not and are not intended to be a final word or closing of a chapter."

The reflections documented the archdiocese's views on the roles of survivors, priests, parishes and the media throughout the course of the past ten years dealing with clergy sexual abuse, and moving forward.

The reflections explained that in response to the crisis priests, deacons, religious, and the cardinal visited affected churches throughout the years; arranged personal meetings for five survivors with Pope Benedict XVI in 2008; and settled roughly 800 claims of abuse since 2003.

"Although we have made much progress over the past ten years, we do not mark this anniversary as a time to congratulate ourselves on or achievements," the document stated, in the context of explaining efforts by the Church to combat the effects and prevent recurrence of sexual abuse of minors.

Through the Office of Pastoral Support and Outreach (OPSO), the Archdiocese of Boston met with over 1,000 survivors and family members, spent $7 million in seven years to help survivors and families, and actively assist around 300 people at any given time, according to the reflections.

Since 2002 the Church put efforts into training and education as the central component of its commitment to protect children from any sexual abuse, according to the document. Parish schools and religious education programs in the archdiocese trained 300,000 children and 175,000 adults as part of these efforts.

The Archdiocese of Boston runs 60,000 Criminal Offender Record Information (CORI) checks annually, according to the reflections.

At the last international meeting of cardinals, Cardinal O'Malley advocated for his peers to take up policies in place in the Archdiocese of Boston to protect children. The reflection highlighted the advocacy by appealing for the implementation of similar policies throughout the Church and elsewhere internationally.

The reflection pointed to evidence that sexual abuse of minors as a widespread societal issue, stretching beyond just the Catholic Church.

The reflections also thanked the media for bringing the abuse problem to the surface, but also called for a reasoned characterization of the narrative surrounding the abuse scandal.

"The more the media and universities can present the problem of sexual abuse of minors accurately, transparently and with appropriate context, the safer children will be in all environments as a result of increased attention and strengthened policies," the reflections urged.

The reflections renewed the archdiocesan commitment to the protection of children, and said the Church will retain the lessons learned from the clergy abuse crisis.

"Our Church will never forget the clergy sexual abuse crisis. The traumatic and painful days we experienced ten years ago rightfully forced us to address the issue honestly and implement many necessary changes. We will always focus on the protection of children with the utmost seriousness and gravity," the reflections promised.