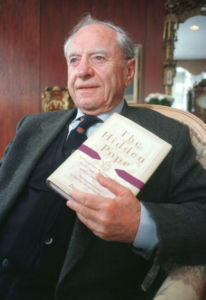 Blessed John Paul II's lifelong friend Jerzy Kluger poses in 1998 with a copy of his book "The Hidden Pope." Kluger, a Polish Jew whose friendship with John Paul helped the pontiff's efforts to repair Catholic-Jewish relations after centuries of anti-Semitism, died at age 90 Dec. 31 at a hospital in Rome. (CNS photo/Leslie Kossoff)

ROME (CNS) -- Jerzy Kluger, known as Blessed John Paul II's lifelong Jewish friend and one who had a deep impact on the pope's commitment to improved Catholic-Jewish relations, died in Rome Dec. 31 at the age of 90.

Kluger and the pope were raised in Wadowice, Poland, and attended elementary school there together. Most of Kluger's family died during the Holocaust, but he managed to survive, eventually settling in Rome.

During the Second Vatican Council, when the future pope came to Rome as an auxiliary bishop of Krakow, Poland, he and Kluger were reunited. They maintained their friendship through the years, and Kluger was a frequent guest at the Vatican after the pope was elected in 1978.

In his 1994 book, "Crossing the Threshold of Hope," the pope wrote about his friendship with Kluger in the context of explaining why he had made improving Catholic-Jewish relations a priority in his pontificate.

The pope said the Second Vatican Council's teaching on the shared traditions of Christians and Jews reflects the personal experience of many people, including his own "from the very first years of my life in my hometown. I remember, above all, the Wadowice elementary school, where at least a fourth of the pupils in my class were Jewish."

"I should mention my friendship at school with one of them, Jerzy Kluger -- a friendship that has lasted from my school days to the present," he wrote.

Kluger, who was born April 4, 1921, was 11 months younger than the pope. At the time of his death, he was living in a nursing home after being diagnosed with Alzheimer's disease.