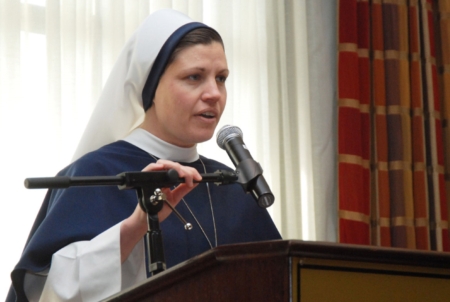 The strength, depth, and vitality of the Archdiocese of Boston's Pro-Life movement was evident at the Women Affirming Life's (WALI) Advent Mass, breakfast, and forum, held on Dec. 17 at the Four Points by Sheraton Hotel in Norwood. A record number of guests, more than 320 women, men, and children attended the annual event.

"That so many Catholics come together and so readily share their values through this event is a sign of hope not only for the Pro-Life movement but for the Catholic Church as well," said Marianne Luthin, director of the Archdiocese of Boston Pro-Life Office, which oversees WALI.

WALI has been sponsoring the get-together for more than two decades. This year's event began with Mass celebrated by South Region Bishop John Dooher.

Touching upon key themes from the Gospel, he noted, "The Advent season reinforces the feeling of connectiveness we have with our family."

The idea of family was prominently displayed at the event.

A few years ago, WALI member Kristine DeMatteo of Wellesley, recommended that women start bringing their daughters to the breakfast, and a sizable number of mothers took her advice this year.

Izzi Lombrecht, a student at the Montrose School in Medfield, came along with her two sisters, Abbi, also a Montrose student, and Emma, who attends Our Lady's Academy.

Izzi thought the keynote speaker may offer some insights during this Advent season, and she was not disappointed.

The keynote speaker was Sister Maris Stella Karalekas SV, Sisters of Life, a Ludlow, native who appropriately attended the breakfast with her mother as well as her sister.

Sister Maris Stella, who graduated from the U.S. Naval Academy and spent five years as a naval officer before joining the order, recommended three steps to "Make Room for Christ in the Inn of Our Hearts": silence before God, confession, and developing a contemplative outlook on our daily events.

Since the birth of Jesus, busyness tends to define the Christmas season, she said.

"One irony from the Gospel is that although the world thought it was ready and waiting to receive its savior, there was no room for him at the inn," explained Sister Maris Stella. She noted that during the Christmas season, Catholics need to make room for Jesus in their hearts, their lives, and their relationships.

That type of outlook is one reason why many individuals said they attended the WALI event.

"I feel a kinship, a special connection, with the attendees," said Betty Ivanoski, from St. John the Evangelist Parish in Canton.

The special feeling transcends local and regional borders. The attendees came from parishes spread out throughout the diocese and beyond.

Kelly Lockwood traveled from St. Patrick's of Nashua, N.H. for the forum.

"The WALI breakfast is a great time to catch up with old friends and make new ones," she said.

Women Affirming Life was founded to offer an authentic Catholic women's perspective in the public discussion of life issues. It operates under the philosophy that each woman contemplating an abortion is a daughter or a sister, and each unborn child is our own.

Three years ago, the work of Women Affirming Life became a ministry of the archdiocese's Pro Life Office.

The ministry holds two Mass and Breakfast events: one during the Advent season and a second in the spring. In addition, the organization holds a Lenten retreat.

The theme of this year's spring gathering is "Physician Assisted Suicide: How to Inform Ourselves for a Meaningful Response" with guest speaker M.C. Sullivan, RN, MTS, JD.

The conference will come as Massachusetts voters will likely be considering a ballot question on legalizing physician assisted suicide.

Robin Blesius of St. Mary -- St. Catherine of Siena Parish in Charlestown, was carrying the youngest of the attendees: she was scheduled to give birth to her family's first child on Dec. 27.

"It would be an ideal Christmas present if the baby came a bit early," she said.