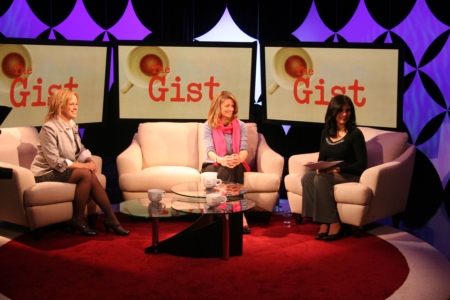 Co-hosts Danielle Bean, Rachel Balducci, and Carolee McGrath on the set of the new CatholicTV Network show, "The Gist" that will focus on issues of importance to Catholic women. Pilot photo/Courtesy CatholicTV Network

WATERTOWN -- The CatholicTV Network will debut "The Gist" in January as part of its efforts to boost its programming relevant to Catholic women.

The Gist, a half-hour weekly talk show, will feature two conversation segments, a review segment, as well as a break-out interview featuring a guest relevant to Catholic women and their lives as mothers.

The two conversation segments will cover topics relevant to Catholic women and Catholic mothers. The review segment will present the hosts' thoughts on a particular piece of media such as a book, a film, or an album. During the breakout interview, The Gist will interview an expert on an aspect of Catholic women's lives, such as an author on Catholic family life as featured in the first episode.

Show co-hosts Danielle Bean, Rachel Balducci, and Carolee McGrath spoke with The Pilot about what to expect from the new show.

Bean said in the first conversation segment of the first episode the show took up the topics of working mothers balancing work and home life.

"Then in the second segment we had the topic of moms' prayer life and how moms can seek their spiritual side, despite the fact that they have busy schedules," said Bean.

Bean, a mother of eight, works as the editor in chief of the magazine Catholic Digest. She also the author of "My Cup of Tea: Musings of a Catholic Mom, Mom to Mom, and Day to Day: Advice and Support for Catholic Living."

"Generally we are looking for people who have relevance to Catholic women," she said, of potential guests for the show.

Balducci, a writer and a newspaper columnist, lives in South Carolina with her husband and their five sons and one daughter. Her first book, "How Do You Tuck In a Superhero," debuted in April 2010. Balducci also authors the blog "Testosterhome: on the care and feeding of boys."

She reviewed the book "Wish you Were Here" by Amy Welborn for the first episode.

Balducci said the hosts remain open to using social media, and other ways, to dialogue with viewers about topics, reviews, and guests for the show.

"We definitely want to get feedback from people. We want to have topics that are of interest to our viewers," Balducci said.

"We will post questions and get feedback on those kinds of things," she said.

Balducci also said the show remains open to the possibility of non-Catholic guests on the show to bring in experts such as professional chefs and organizational experts.

"There is going to be a wide variety of people that will talk to us," she said.

McGrath hosts "Lifelines" at CatholicTV Network and will co-host the new series in 2012. She is a television news reporter in Springfield, Hartford and New Haven.

"It is really a way of reaching out to other moms, who are living the life of faith, raising children, and working with those challenges of having families and working part-time or full-time," McGrath said.

"We have so many things working against us, as Catholic women," McGrath said.

"We need encouragement in that. We need to say, 'You know, it's OK to stand strong in our faith. It's OK to stand on that foundation. It's OK to profess that, hey, we love Jesus, we love going to Mass, and we love doing the Rosary," McGrath said.