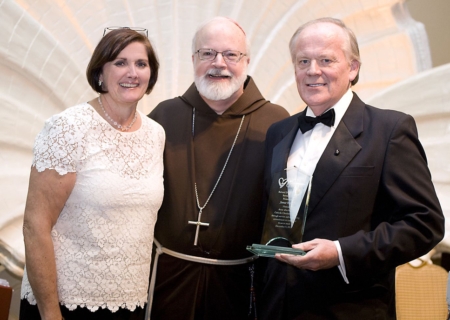 Boston Catholic Charities presented the award to Brett for living the Gospel through a life of service and commitment to those in need, in the tradition of the namesake of the award Richard D. Armstrong, Jr.

A statement from the group said Armstrong "chose to devote his time and skills to caring for those who needed help, always doing so quietly and never seeking public recognition for his efforts."

"I am truly humbled to be honored with this award, particularly since it is named after my dear friend Richard Armstrong, who has always been such an inspiration to me," Brett said.

Brett, a Dorchester resident and New England Council president and CEO since 1996, served in the Massachusetts House of Representatives for over 15 years. Brett has advocated for people with intellectual disabilities through various administrations, in all levels of governance, and across both sides of the aisle.

"Jim is a wonderful friend to Catholic Charities," President of Catholic Charities Debbie Kincade Rambo said in an email to The Pilot. "We are proud to recognize Jim and it is even more perfect to honor him with this particular award as he and Richard (Armstrong) have been dear friends for decades and both are an inspiration to us all."

Speaking with The Pilot, Brett said helping people with intellectual disabilities became the core calling of his career early in life.

"The two people that are responsible for my advocacy for people with disabilities are my mother and my brother Jack," Brett said.

Brett said doctors in 1934 told his mother, Mary Ann Brett, not to have any more children and that she should let the hospital place her baby, James' older brother Jack, in the care an institution.

The strong Irish Catholic mother, having only been in the United States for a few years with only a sixth-grade education, told the doctor that not only would she have more children but that those children would enhance the life of her first-born.

"Sure enough she had five other children," Brett said. "I saw what my mother went through in bringing him up, and bringing him up in a family of love."

Powered by the emotions of these experiences, Brett committed himself to the Catholic teaching that each person deserves a dignified life of love.

"I went into public office making a pledge and a promise to my mother, and to my brother, that I would spend an awful lot of my time, in public office or outside of public office, being an advocate for people with disabilities," Brett said.

In 2002 President George W. Bush appointed him to the President's Committee on Mental Retardation. He went on to similar appointments at the state level under Massachusetts Governors Jane Swift, Mitt Romney, and Deval Patrick.

"I have always said, when advocating for people with disabilities, it is not a Democratic issue, it is not a Republican issue, to me it is a civil-rights issue," Brett said. "It is being a voice for people who have no voice."

His work culminated, in May 2011, when President Barack Obama appointed him the chairman of the President's Committee for People with Intellectual Disabilities.

"With congress and politics being at a point of gridlock and people not getting along, I have been very fortunate to navigate through that maze," he said.

Brett still serves at state-level as the Chairman of the Massachusetts Governor's Commission on Intellectual Disability.

Brett and his wife Pattie, active members of Blessed Mother Theresa of Calcutta Parish at St. Margaret's Church in Dorchester, took the occasion of his 60th birthday to bring together friends, colleagues and former staff to raise nearly $40,000 for the parish, Brett said.

That night the parish named the food pantry the Mary Ann Brett Food Pantry, to honor the influential role she has played in Brett's life.

"I thought that was an extraordinary gesture," Brett said.

Brett serves on the board of directors of The Missionary Society of Saint James the Apostle, and as a member of the Knights of Malta, the Equestrian Order of the Holy Sepulchre of Jerusalem, the Sacred Military Constantinian Order of Saint George, and the Royal Brotherhood of the Order of Saint Michael of the Wing.

"He has done so much good for the most vulnerable members of our community whether it be at the food pantry named in honor of his mother, at his local parish, or advocating for those with intellectual disabilities on a national stage, and it often goes unrecognized," Rambo said. 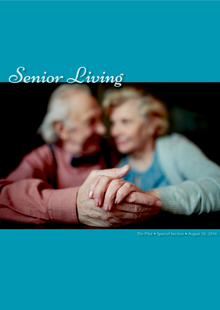