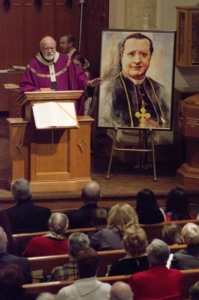 FRAMINGHAM -- Xaverian missionaries from throughout the United States joined with Cardinal Seán P. O'Malley and Worcester Bishop Robert McManus on Dec. 11 to celebrate the canonization of their founder, St. Guido Maria Conforti, at St. Bridget Church in Framingham.

The Mass and luncheon marked the first local celebration of the U.S. province after the Xaverians returned from witnessing the Oct. 23 canonization in Rome. According to the organizer all but a handful of Xaverians in the U.S. were present at the celebration.

"We're very happy that we have the Xaverian missionaries in the archdiocese, and we want to congratulate them on the canonization of their founder," Cardinal O'Malley told The Pilot following the Mass. "It's a recognition of the valuable contribution that they have made, and are making, in the life of the Church, particularly in the sacrifices that they make to carry the Gospel to the ends of the earth."

In his homily, Cardinal O'Malley intertwined the themes of the strong spiritual example set by the new saint with the theme of Advent as a time when Catholics anticipate the gift of the savior to the world.

"Advent is here so that we can embrace the gift the way that all saints did, especially the way that St. Guido Maria Conforti did -- sharing his faith with the world," the cardinal said. "The gift comes wrapped in the straw of the manger, but that gift will change our lives."

Bishop McManus hosts the Xaverian Missionary Sisters of Mary in the Diocese of Worcester where, among other works, they promote the Hispanic Ministry.

"I'm just very impressed since I have met the sisters with their apostolic zeal and the tremendous missionary influence they have had throughout the globe. So many countries they have brought the Gospel, and they have done it with such great love and with such generosity," Bishop McManus said.

"They are a great inspiration to all of us, especially at this time when the whole Church is looking forward and involving itself in a New Evangelization," he added.

Sister Maria Veronica Paredes, of Concordia Sinaloa, Mexico, helps coordinate the Hispanic Ministry at the Cathedral of St. Paul in Worcester. She was introduced to the teachings and life of St. Guido when a Xaverian priest gave her a book about the saint's life.

"To me it was very, very amazing, the life, the spirituality, of Msgr. Conforti," she said. "I can say that it was a special point that I found to discover my vocation, and to be a Xaverian sister."

Speaking with The Pilot at the luncheon, Provincial Superior Father Carl Chudy, SX, paused before he sharing his insights on the life of St. Guido and the saint's influence on the work of the Xaverian order moving forward.

"Well actually, we already know how special he is; now we get to share him with the rest of the Church," Father Chudy said.

Born in 1865 in Parma, Italy, St. Guido began minor seminary schooling at 11 years old. At age 17 he entered major seminary, but the onset of epilepsy delayed his education.

Before graduation in 1888, he read about the life of St. Francis Xavier, who died on Shangchuan Island off the Chinese coast before attempting to bring the Gospel to the mainland. The young seminarian vowed to take up where St. Francis Xavier left off.

"He founded our congregation at a time that there was a big missionary revival in the Catholic Church," Father Chudy said. "In those days it meant China. That was like the Mecca of mission-land."

St. Guido appealed to various missionary institutes, including the Jesuits and the Salesians, but the Church needed him at home to evangelize in the face of pro-Communist sentiment in Parma.

In an 1889 Christmas letter to a friend in the priesthood, he stated his inclination to evangelize in China.

"But please, keep this absolutely to yourself, for it could be bad for me, as young as I am, to be even thinking and harboring such daring plans," the saint wrote.

As young as St. Guido was, Cardinal Mieczys aw Halka Ledochowski, prefect of Propaganda Fide, appointed the 30-year-old priest vicar general of the Diocese of Parma.

He wrote a letter to Cardinal Ledochowski in 1894 outlining his plan to start a missionary group to pursue the unfinished work of St. Francis Xavier in China as he tended his duty to the Church at home.

"The seminary I will found shall bear his name and take its inspiration from him," St. Guido wrote. "I will sacrifice my entire self and all I possess in order to proceed in this holy venture."

On the feast day of St. Francis Xavier in 1895, Borgo Leon d'Oro opened its doors as the house of the order in Parma. The first 14 students of the Xaverian Institute studied and prayed there.

By the beginning of the 20th century, the Xaverians had sent a missionary to China. Racked by a civil war, plagued with anti-foreign sentiment, and openly hostile to Christianity, the turbulent political and physical climate cost the new order the life of their first missionary.

The Xaverians continued their efforts, in spite of the tragedy. They built the Xaverian Mother House in 1901, and pressed on despite pressure for their missionaries to join other orders.

"The crucifix is the great book upon which the saints were formed and we too must be formed by it," St. Guido said in 1904, upon sending the first group of Xaverians east. "All the teachings of the Gospel are summed up in the crucifix."

The Xaverians worked in China building a cathedral in Chengchow, helping orphans and the sick, and founding a congregation of Chinese sisters.

Toward the end of his life St. Guido visited his missionaries in China. Saying goodbye to "the Great Bishop," as the Chinese called him, the missionaries would never see their founder again. Having finally realized his ambition and seen the foundation laid, he returned to Italy where he spent his final days in the company of students at the institute, dying in his home near the cathedral. He passed to the Lord in 1931.

After the violent backlash against organized religion in Communist China forced the Xaverians out of the country, the order spread throughout the world by students from Parma.

Father Frank Grappoli came to the United States after schooling in Parma.

"The beautiful thing about St. Guido Conforti is that he was a local bishop in Italy, but he had the mind of the true mission of the Church," Father Grappoli said. "'Go into the whole world,' the Lord said. So he was a bishop locally, but he had his idea to bring the Gospel to the four corners of the world."