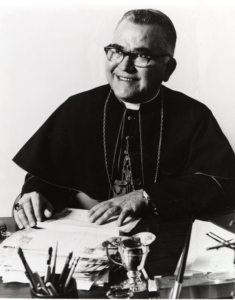 His primary education took place in the public schools of Lajas and San German. His frequent service as an altar boy contributed to his discernment of a vocation to the priesthood. He entered the Minor Seminary of San Ildefonso in Old San Juan on Sept. 18, 1940. In 1943, he entered St. John's Seminary in Brighton where he completed his philosophical and theological studies. He received a Doctorate in Law from St. Leo College in St. Leo, Florida; a Doctorate in Humanities from Seton Hall University in New Jersey; and another Doctorate in Humanities from the Universidad del Sagrado Corazon. He has been awarded honorary degrees by Fordham University in New York, St. Michael's College in Winooski, Vermont, and the San German campus of the Universidad Interamericana de Puerto Rico.

He was ordained a priest for the Diocese of Ponce on April 10, 1950 in the Church of San German de Auxerre, in San German, Puerto Rico, by Bishop James Edward McManus, CSSR, Bishop of Ponce. He was engaged in pastoral ministry in the parishes of Maricao, Santa Isabel, Patillas, and Aibonito. Bishop McManus chose him as his secretary in 1955. Father Aponte worked in the Ponce chancery office as vice chancellor, superintendent of Catholic schools, and chaplain of the Puerto Rican National Guard.

On July 23, 1960, Blessed Pope John XXIII named Father Aponte Titular Bishop of Lares and Auxiliary Bishop of Ponce. He was ordained bishop on Oct. 12, 1960 in the Church of Maria Reina in Ponce by Francis Joseph Cardinal Spellman, Archbishop of New York, who was assisted by Archbishop James Peter Davis of San Juan and Bishop Edward John Harper, CSSR Titular Bishop of Heraclea Pontica and Prelate Ordinary of the Virgin Islands. For his episcopal motto, he chose In Virtute Dei (In the strength of God).

On April 16, 1963, Bishop Aponte was named Coadjutor Bishop of Ponce with the right of succession and upon the resignation of Bishop McManus on Nov. 18, 1963, he became Bishop of Ponce. He took possession of the See of Ponce on Feb. 22, 1964. He was Bishop of Ponce for less than one year when Pope Paul VI promoted him to the Metropolitan See of San Juan de Puerto Rico on Nov. 4, 1964. He was installed as Archbishop of San Juan on Jan. 15, 1965. He postulated the pallium by procurator on Feb. 22, 1965 and he received the pallium on June 24, 1965.

Archbishop Aponte attended the first, third, and fourth sessions of the Second Vatican Council. He was a member of the First Extraordinary Assembly of the Synod of Bishops in October 1969; the Third General Assembly of CELAM from January to February 1979 in Puebla, Mexico; the Fourth General Assembly of CELAM in October 1992 in Santo Domingo, Dominican Republic; and the Special Assembly of the Synod of Bishops for America in Vatican City from November to December 1997. He was president of the Puerto Rican Episcopal Conference from 1966 to 1982 and was president of CELAM's Economic Committee from 1972 to 1983.

On March 5, 1973, Pope Paul VI created Archbishop Aponte a cardinal of the Holy Roman Church, imposing the red biretta on him and conferring on him the presbyteral title of Santa Maria Madre della Providenza a Monte Verde.

During his episcopate, Cardinal Aponte conferred episcopal ordination on six Puerto Rican bishops and was a principal co-ordaining bishop for four other bishops including Boston Auxiliary Bishop Roberto Octavio Gonzalez Nieves, O.F.M. who would succeed His Eminence as Archbishop of San Juan.

Cardinal Aponte's resignation from the Metropolitan See of San Juan was accepted by Blessed Pope John Paul II on March 26, 1999. He remained Apostolic Administrator of the archdiocese from that date until May 8, 1999.

Cardinal Aponte was the second Puerto Rican to be ordained a bishop, the first being Bishop Juan Alejo de Arizmendi, Bishop of Puerto Rico from 1804 to 1814. He is the only Puerto Rican to have been created a cardinal.

Luis Cardinal Aponte Martinez has shown great pastoral solicitude and love for his people whether they are in Puerto Rico or have emigrated and he is greatly loved by them. He has spoken forcefully against the "culture of death" -- abortion and euthanasia -- and has reiterated that the centrality of Christ is essential to solving the problems of this age.