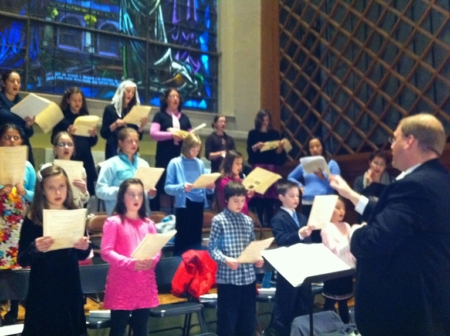 BELLINGHAM -- Children's voices chanting the ancient prayers of the Mass descend from the choir loft at St. Brendan Parish in Bellingham one Sunday each month. While hardly a new sound for the Catholic Church, it is a welcome one for the pastor, parishioners and parents of the choir members.

The Blackstone Valley Catholic Youth Choir, which formed this past August, consists of 19 8-15 year-olds who come from different parishes to lift their voices in song together. They have learned some Gregorian chant and songs in Latin. They practice every week, sing at St. Brendan's Latin Mass once a month and perform at concerts and festivals. At their next concert, they will join the children's choir of St. Paul Cathedral in Worcester on Dec. 18 at 3 p.m.

While singing in Latin is only part of the traditional singing done by choir members, it certainly is one piece they are very enthusiastic about.

She added that she really enjoys making a joyful noise with peers and listening to the sound as their voices intermingle. About the songs they sing, "They're ones that can hit you right down in your heart."

Some of what the young people enjoy about their new found choral experience is religious and other parts are not. Some of the girls expressed their enjoyment of the gowns they wore at the last concert. Almost all cited the importance of the fellowship of the choir. But all of their enthusiasm is directed toward an activity that brings them a new experience of faith in their very young lives, and their parents hope it will strengthen the formation of their souls.

Erika Bachiochi, who has a pair of daughters in the choir, said that since joining, both girls walk around the house singing beautiful hymns.

"It has to be penetrating their souls," she said. "This beautiful music has a power to penetrate their souls in a way that some of the more modern Church music doesn't."

She said that the music is catechetical and communicates a sense of majesty that matches the holy sacrifice of the Mass. The sacrifice her own family makes in attending rehearsals, Masses and concerts is "worth it."

Her daughter, Anna, 10, said she enjoys the challenge of learning new songs and thinks it's fun to practice. The language used in these traditional songs is different from the ones she had sung while in another choir. She said they are "more kingly words."

The director of the choir, Michael Olbash, decided to found it when he and another parent realized that there were no opportunities for young people in their area to sing traditional Catholic music. His 8-year-old son is a member of the choir.

Olbash, a professional musician who is employed by the United Church of Christ in Medfield, said he hopes that children involved with the choir will leave with a set of skills that allow them to sing any kind of music they want in any setting. He seeks to teach them to read music and learn the tools of the musical trade, a skill which cannot be rushed.

"We live in a culture where everything is a click away, and children are used to having their whims satisfied instantly," he said.

By sharp contrast, music is learned through practice and repetition in the same way that it has been for hundreds of years. So far, the choir members have learned to sing parts of the Mass that do not change week-to-week like the Kyrie and Gloria. Soon, Olbash said they will begin to learn the communion and entrance chants.

He also hopes to teach them the meaning of each Latin word, show them the biblical references to the parts of the Mass and help them understand the richness of the Mass more deeply.

Father David J. Mullen, pastor at St. Brendan's, said that he has received much positive feedback about the children's choir and called their singing "very beautiful." He said that the choir presents the young people with an "unusual chance" and grants them an appreciation for some of the deeper traditions of the Church.

He added that a friend of his in Houston, Texas is a priest whose parish has a Latin and Gregorian chant choir for first graders.

"Young people can do chant, and the Church has known that for centuries. We are rediscovering that," Father Mullen said.