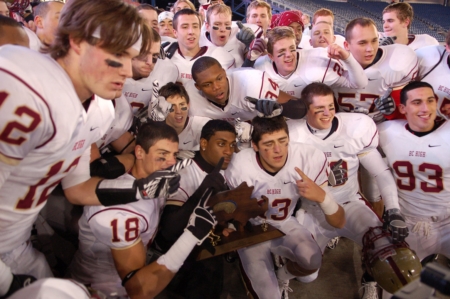 Playing at home on Thanksgiving Eve, the MC Lancers celebrated a 20-12 win over Waltham High in a non-league game. Stars of the game were Junior Axel Kabeya, scoring two touchdowns in the first half and Scott Layton contributing four tackles. Led by first year coach Jeff Smith, Malden Catholic ends at 3-7. Waltham ends at 4-6.

The Fenwick Crusaders took to their home field in Peabody and had a great time taking on their neighboring rival Austin Prep and celebrating a 42-29 win. Freshman player Rufus Rushins scored three touchdowns. Off to a great start in his career, he finished the season with 1,092 yards to become the first Fenwick freshman to reach the 1,000 yard mark. Also contributing to the win was Will Clancy with 18 tackles and a recovered fumble and Brandon McCauley with 14 tackles. Led by head coach Dave Woods (14th season), Fenwick ends at 3-8. Austin Prep, led by Bill Maradei (33rd season) end at 3-7.

The 16th match-up between these city rivals took place at Lynn's Manning Bowl. The St. Mary Spartans pummeled the Tech Tigers 44-8 on Thanksgiving Eve. Seniors Todd Collier, Jordan Collier and Corey Donahue all came ready to play, scoring touchdowns and setting records in eclipsing the 1,000 yard mark. Led by head coach Matt Durgin (4th season), St. Mary's had another great season, ending at 9-2. Last year, the Spartans ended at 10-1. Despite the Thanksgiving Eve loss, Lynn Tech had a respectable season, ending at 7-4. The series is now even at 8-8.

Playing at home in Lawrence, The CC Raiders took on their neighboring rival, Andover, in the 38th matchup in the rivalry. The game turned into an intense battle with the score tied at 34 at the end of the fourth quarter and 40 in the first overtime period. Star of the game was CC's Matt McDermott scoring four touchdowns and the winning conversion in the second period of overtime. Central, led by Chuck Adampopulos, ends at 6-5. The Andover Golden Warriors had a great season too, ending at 7-4.

Excitement and anticipation were in the air as these two fine rivals met for the 50th time at the renamed James O'Connor Stadium at Catholic Memorial. The outcome of the game was the winner of the Catholic Conference Title and a Division 1 play-off spot on Nov. 29. The BC High Eagles prevailed, winning the game 13-0. Both teams played their hearts out but the Eagles led 6-0 at half time thanks to two field goals by Junior kicker Jackson Bockhorst. Neither team scored in the third. BC High fullback Luke Catarius got lucky, scoring a one yard touchdown in the fourth. Despite the loss, CM, led by Alex Campea (9th season), had a great season, winning 7 and losing 2. BC High defeated Chelmsford in a play-off game on Tuesday, Nov. 29 by a score of 34-14 and represented Div. 1 in the Super Bowl game on Saturday, Dec. 1. The Eagles triumphed, defeating Needham 21-7 at Gillette Stadium to win their first Super Bowl since 2008. Led by head coach Jon Bartlett, BC High ends at 10-3.

This years' clash, the 43rd in the rivalry, took place at Cronin Memorial Stadium in Danvers with the Eagles losing to the Xaverian Hawks 28-21. Contributing to 21 points in the third quarter for Xaverian was Zach Maiuri, returning a fumble 65 yards for a touchdown. Putting in a stellar performance for Prep was Jonathon Thomas who scored two touchdowns on 26 carries. Xaverian, led by Charlie Stevenson (19th season) ends at 6-5. Prep, led by Jim O'Leary (28th season) ends at 4-6.

Meeting for the third time in their town rivalry, the Arlington Catholic Cougars capped a great season with a 28-7 win over the Arlington High Spy Ponders. Two Cougars on the hunt were Senior Bernard Lynch, running for 150 yards to score a touchdown and Pat O'Donnell throwing for 140 yards and two scores. Led by headcoach Serge Clivio in his 21st season, AC ends at 9-1, a remarkable turnaround from last years' 2-9. Arlington High ends at 3-8.

With a second consecutive undefeated regular season and Catholic Conference Large Title in hand, the Cardinal Spellman Bishops trounced their Thanksgiving Day rival by a score of 34-0 in Braintree. Spellman advanced to a Div. 4 play-off game on Tuesday, Nov. 29 and defeated Shawsheen 31-7. Led by head coach Ron St. George (4th season), Spellman capped their spectacular season with an appearance at Gillette Stadium for the Div. 4 Super Bowl and lost to Mashpee 34-8. Spellman ends at 12-1. Archbishop Williams, led by head coach Bill Kinsherf (16th season) ended at 1-9.

With an undefeated regular season for the first time in their history and Catholic Conference Small Title in hand, the Cathedral Panthers travelled over to Framingham on Thanksgiving morning to clash with Marian for the fourth time in their rivalry. Leading his team to a 41-0 victory with a stellar performance on the field was senior Geeavontie Griffith, running for 171 yards and scoring four touchdowns. Cathedral advanced to a Div. 4A play-off game on Tuesday, Nov. 29 and in an exciting clash, defeated Chelsea 12-10. Contending for the Div. 4A Super Bowl on Saturday, Dec. 3 at Bentley University, Cathedral lost in a tight game to Blue Hills 16-14. Led by first year coach Duane Sigsbury, Cathedral ends their magical season at 12-1. The Marian Mustangs, led by head coach Gene Robinson in his second season end at 1-10.

These two schools met for the first time at Dilboy Field in Somerville on Thanksgiving morning. The Chelsea High Red Devils got to celebrate a 42-22 win over Matignon and their first Commonwealth Small Title since 1995. Matignon, led by head coach Neil Valeriani, ends at 4-7. Chelsea ends at 5-5.

Playing in Lowell, the Pope John Tigers had a great game, departing with a 58-38 win over their rival. Two players who shone on the field were Robert McMaster, throwing five touchdown passes and Malcolm Brown, scoring four touchdowns. Led by head coach Brian Vaughn in his third season, the Tigers end with a repeat of last seasons' record of 8-3. Lowell Catholic, led by first year head coach Rick Sampson, ends at an even 5-5.

Playing at Tufts in Medford for the 23rd time in their rivalry, the Anchormen had a great game defeating a winless squad from Trinity Catholic by a score of 41-6. Led by head coach Colin Walsh (9th season), St. Clement's reached a team goal of ending over .500 with a record of 6-4, instead of 5-5 for the past two years. Trinity Catholic, led by head coach Craig Genualdo in his second season, ends at 0-11.