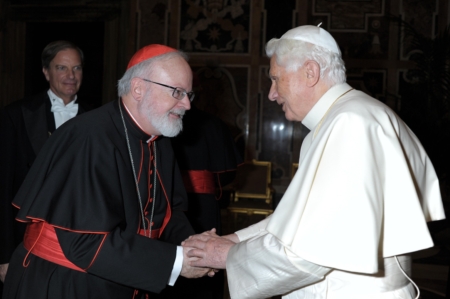 'I am currently on three commissions, and this week (11/28) I have been in Rome for meetings with The Pontifical Council for the Family.' Pilot photo/CardinalSeansBlog.org

Of course this past weekend (11/27) we marked the start of Advent, and English speaking Catholics in the United States began to celebrate the Mass according to a new translation of the Roman Missal. Clergy and lay people throughout the archdiocese have been coming together to prepare for this implementation over the past two years, and I'm glad to hear that all the preparation and catechesis really has paid off! I've been hearing very encouraging reports from pastors, and my own experience of celebrating Mass according to the new translation this past week has been very positive. The new words are rich in meaning and I find that there's a real elegance to the new style of our prayers. I am particularly struck by how many of the new prayers come to us right out of the Sacred Scriptures. I know that this change has been difficult for some people, and for all of us it will take some time to adjust to the new responses at Mass. As a priest, it's as though I'm celebrating Mass for the first time -- really having to pay attention to the words that are printed in the Missal. I'm sure that with time we will all be much more comfortable with these beautiful prayers, and we won't rely so heavily on the printed text in front of us. But for now, I find myself looking down and reading from the book most of the time!

... I am so grateful to the priests and lay people who devoted so much energy over the past few years to help prepare us all for the Missal, and I am most grateful to the pastors and parish staffs who did a great job preparing their congregations for these changes. Keep up the good work!

Pontifical Council for the Family Meetings

As some of you may know, one of my responsibilities to the Universal Church as a cardinal is to serve at various dicasteries in the Holy See. I am currently on three commissions, and this week (11/28) I have been in Rome for meetings with The Pontifical Council for the Family. This year we are celebrating the 30th anniversary of the apostolic exhortation Familiaris Consortio that was published in 1981 by Blessed John Paul II, the same year he created the Council for the Family. A number of cardinals serve with me on the council -- including Cardinal George Pell of Sydney, Cardinal Norberto Rivera of Mexico City, and Cardinal Edward Egan, the former Archbishop of New York -- as well as a number of bishops and archbishops. The president is the Cardinal Ennio Antonelli, who was the Archbishop of Florence.

However, unlike most dicasteries, the Council has a large number of lay members -- including 19 married couples from all over the world. Among them are Supreme Knight Carl Anderson and his wife Dorian; Michael Waldstein of Ave Maria University and his wife Susan; and John Grabowski of The Catholic University of America and his wife Claire. Timothy O'Donnell, the president of Christendom College, is also a consultor to the Council. Of course, there also were people from Germany, Spain, the Philippines, and different countries in Africa, South America, and Central America. In this year's program we heard reports on the situation of marriage and family throughout the world. There were some excellent presentations and discussions on the situation of family life, and the ministry and the challenges of the Church trying to promote family life as part of the Church's mission. I was happy to be the principal celebrant of one of the Masses for the plenary session. I celebrated the Mass on the Feast of St. Andrew (11/30). On Thursday (12/1), we had an audience with the Holy Father in the Sala Clementina, and he made an address to us.