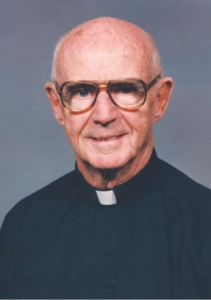 Father Edward F. Gillis, a Somerville native and a son of the late Edward and Loretto (Brine) Gillis died in Hingham on Nov. 24. He would have celebrated his 90th birthday on Dec. 1.

After completing his elementary and secondary education, he entered Boston College as a member of the class of 1943. He transferred across the street to St. John Seminary and completed his theological studies. Archbishop Richard Cushing ordained him to the priesthood at Holy Cross Cathedral on June 14, 1946.

In 1952 he was named assistant director of the Office for Vocations and the following year he became its director. During this time he was in residence at SS. Peter and Paul Parish in South Boston.

Three years later in 1955 he entered the chaplain corps of the United States Navy serving for the next 20 years. When speaking of his military service, he was not at all hesitant about his pride and satisfaction in those years. Among his assignments while chaplain were tours with the First and Third Marine Divisions; aboard the USS Providence and the USS Ranger and a tour in the nation's capital.

On the completion of his military service but before returning to the archdiocese he undertook a priestly renewal program at the North American College at Rome.

On his return home he was assigned briefly as an assistant at St. Joseph Parish, Ipswich. In 1976, Cardinal Medeiros named him pastor at St. Joseph Parish in Wakefield. During his seven years he saw a fire ravage and destroy the parish church, in downtown Wakefield; rallying the parishioners he oversaw the construction of a new church and rector on the site of the previous church.

He resigned from the parish in January 1983 and during the next two years he served as a parochial vicar at St. Joachim, Rockport; St. Richard of Chichester, Danvers; and Our Lady of Mercy, Belmont.

Cardinal Law named him pastor of Holy Ghost Parish in Whitman and in 1987 named his parochial vicar at Our Lady of the Rosary Parish in Stoughton. On Dec. 1, 1991, his 70th birthday he was granted senior priest retirement status.

Father John W. McElroy, a senior priest of the archdiocese, long time friend of Father Gillis and himself a former military chaplain was to be the principal celebrant and homilist of Father Gillis' Funeral Mass at St. Francis of Assisi Church, Braintree on Dec. 1 -- which would have been his 90th birthday. Among those indicating they would concelebrate the Funeral Mass were St. Francis pastor, Father Kevin Sepe; Father Paul Soper, pastor of St. Albert the Great, Weymouth; and Father Edwin Condon, senior priest and former Navy chaplain, Hingham.