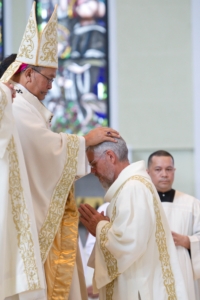 Long-time Boston resident Edwin Bushu was ordained a priest for the Archdiocese of Agana, in the U.S. territory of Guam, by Agana Archbishop Anthony Apuron, OFM Cap. Nov. 19.

Two of Father Bushu's sisters, six members of his home parish of Our Lady of the Assumption in East Boston and Father Carlos Flor of Immaculate Conception Parish in Revere travelled to the western Pacific island to attend the ordination Mass celebrated at Dulce Nombre De Maria Cathedral-Basilica.

Father Bushu, now 67, comes to the priesthood following a long path of life experiences. Raised in Colorado in a family of ten children, Father Bushu wanted to be a missionary religious brother after high school. After a few years in formation, he took a different path, receiving a degree in agriculture from the University of Louisiana. In the early 1970s he worked helping impoverished communities in West Africa.

After returning to the States, he worked in agriculture and construction before pursuing studies as a registered nurse. As an RN, he worked for several years caring for the priests at Regina Cleri, the archdiocese's residence for retired priests in Boston.

Having lapsed in his Catholic faith over the years, in 1988 he joined the Neocatechumenal Way which he credits with re-introducing him to the love of God. In 1996, hearing of the need for volunteers to announce the Gospel, Father Bushu left his profession and was sent to work as an itinerant catechist with the Neocatechumenal Way to various dioceses in the United States as well as in East Africa. While he was carrying out this missionary work, he was encouraged to consider the vocation to the priesthood. He accepted this invitation and in October 2008 he arrived on Guam to begin his formation at the Redemptoris Mater Archdiocesan Missionary Seminary there. Because of his earlier studies, Father Bushu was able to complete his studies for the priesthood in three years and was ordained a deacon in February.

Accompanied by Archbishop Apuron, Father Bushu travelled back to Boston to celebrate a first Mass for parishioners of Our Lady of the Assumption Nov. 27.