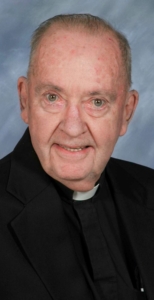 After years of declining health and almost three years in the care of the Carmelite Sisters at St. Patrick Manor, Father Robert N. Kelleher died on Nov. 18 at the Framingham extended care home.

A Melrose native where he was born on July 23, 1934, he was the son of the late Cornelius and Mary (Sullivan) Kelleher. He attended local schools and then Malden Catholic High School. On graduation he entered archdiocesan seminaries and on Feb. 2, 1959, the recently created Cardinal Richard Cushing ordained him to the priesthood at Holy Cross Cathedral.

He was assigned as assistant at St. John the Baptist Parish, Peabody which then as now is one of the busiest on the Northshore. Eight years later he was assigned, again as an assistant, to Sacred Heart Parish in East Boston. Two years later he was in the Bronx, assigned to higher studies at Fordham University where he was granted a Master of Arts degree in Religious Education.

On his return to the archdiocese in June 1970 he was named an assistant director for the Archdiocesan CCD (now Religious Education) office. He served there for 12 years, living in residence for part of that time at Newton's Corpus Christi rectory. During this time he served also as a member of the Archdiocesan Liturgical Commission.

In October 1982, Humberto Cardinal Medeiros named him pastor of St. Edward Parish in Brockton where he served for three terms, completing that assignment in October 2000. He was for a number of years a member of the Archdiocesan Emergency Response Team while living in his own residence in Gloucester.

On Jan. 1, 2007 he was granted senior priest/retirement status and in February 2009 he moved to St. Patrick Manor.

Father Kelleher's Funeral Mass was celebrated on Nov. 22 at St. Edith Stein Parish in Brockton. Father Mark Noonan, a classmate and friend was the principal celebrant and homilist.

South Regional Bishop John Dooher was present and celebrated the final commendation for Father Kelleher, bringing the condolences of Cardinal O'Malley as well.