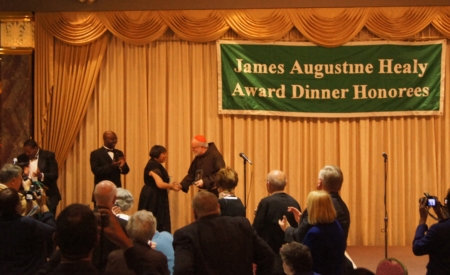 RANDOLPH -- Three hundred sixty six guests nearly filled the Grand Ballroom at The Lantana on Nov. 19 for the presentation of the 2011 Healy Award to The Honorable Antoinette E. McLean Leoney, 61, and the 2011 Ruffin Award to Reverend Gerald Osterman, 69, pastor of Immaculate Conception Parish in Everett.

Cardinal Seán P. O'Malley presented the awards to each candidate, for exemplification of values honored by the awards for service to and within the Black Catholic community.

"At this annual Healy Dinner it's a wonderful opportunity to recognize and honor individuals who epitomize the values and the ideals of Bishop Healy," Cardinal O'Malley said.

"This year's choices, as always, are stellar examples of people who are living lives of service and generosity that is the fruit of their deep faith and commitment to the Lord and to the Church."

In her acceptance speech, Judge Leoney related her commitment and support for the Church in the local Black Catholic community, as well as her career path which culminated with her appointment as associate justice of the Massachusetts trial court by Governor Deval Patrick. All this while maintaining her own spiritual commitments and raising her son, Dasan C. Leoney, now 37, as a single mother.

She received the Bishop James Augustine Healy Award for providing strong effective leadership and service to the Black Catholic community in Boston, as per the provisions of the award.

"Ooh! 'How do I feel about receiving the award tonight?' I don't know I just hope I don't cry," Judge Leoney said. "I'm just so humbled by it. I was very surprised about the fact that I was named for it; it sort of came out of left field."

In fact she did not cry but sang after the cardinal shook her hand while handing her the glass-etched award.

She described her life rising from poverty, losing her father, becoming an adult single mother, and eventually sharing the news of her judicial appointment with her mother on her final eve. Her mother invoked God's name indicating that she understood, despite not having spoken for months before hand, Judge Leoney said.

"If you look at all of the honorees that we've had since 1993, they all speak to various things that they've done in their lives by living good examples, good healthy examples," Meyer J. Chambers said, who helped establish the award dinner in 1993.

Father Osterman received the Robert Leo Ruffin Award, honoring selfless sacrifice, creative vision, and significant service to the Black Catholic community. He demonstrated his commitment to fostering educational opportunities a criterion for the award in his acceptance speech. He told of Ruffin's commitment to education.

"It is here perhaps that Robert Leo Ruffin's passion and my passion intersect. I believe that education, excellent education, is a basic human right for all."

He went on to speak about his work throughout his years serving the Boston Archdiocese, including a ministry in Haiti. He recounted discussing with a woman in his group about building a library for the small village. He politely told her there might be more pressing priorities, but she insisted, he said.

"One day I was walking down a path heading to the marketplace, and I came upon a young man sitting on the side of the path, reading. He was about 19 or 20, shirtless, and muscular from working in the field behind him with a machete and a hoe that lay beside him."

"I asked him what he was reading," Osterman said.

Osterman said the young man showed him a copy of Blaise Pascal's "Pensees" a work defending the Christian faith.

"That day convinced me that the library was a good decision. There is a thirst that cannot be quenched by water alone."

Osterman said he believes the story resonates truth replicated throughout rural areas throughout the world and in urban neighborhoods in the United States.

Addressing the crowd as the featured speaker was Fredron Dekarlos Blackmon, OBL, S.B., sixteenth Supreme Knight of The Knights of Peter Claver.

"Activities and endeavors, such as this award ceremony, help the faithful to see how tangible it is for us to do what Christ compels us to do," he said. "So when we have opportunities like this, we can see first-hand that good people do exist. We can all do a little bit to take the hard right as opposed to the easy wrong, standing up for people who have no one to stand for them."

Blackmon is the youngest Supreme Knight in the contemporary history of the organization, and known for working with youth.

"We cannot belong to Jesus Christ, without being a part of the full body of Christ," he said. "Being born again to new life in Christ brings forward a whole community and family of faith."

His words reached a group of young people that night. Marian Basin, a modern language teacher at Boston College High School, brought a group of students to the dinner.

"I think it's really important to witness older people that are still active in their communities, because it shows that the process of being committed to justice is still there throughout the entire lifetime," John F. Gabelus, 16, a rugby player at the Jesuit school said.

"I think it's really important to young people to see these kinds of role models in their everyday lives," he added.