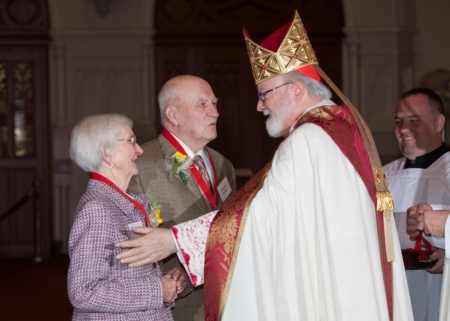 SOUTH END -- In a prayer service Nov. 20 at the Cathedral of the Holy Cross, Cardinal Seán P. O'Malley presented 97 laypersons, permanent deacons and religious with the 2011 Cheverus award medal.

The cardinal personally shook the hand of each honoree, as he placed the award -- an oval-shaped, sterling silver medal, bearing the likeness of Boston's first bishop Jean-Louis Anne Magdelaine Lefebvre de Cheverus -- around the neck of the respective individual.

"It's an opportunity for us to just express our thanks to God for them and to let them know that they are appreciated, and that they are a blessing for the whole family of Catholics," Cardinal O'Malley said in an interview after the service.

The annual award ceremony and prayer service recognizes honorees for service to the Church over an extended period of time done in a quiet, unassuming and -- in some cases -- unrecognized fashion.

Pastors nominate laypeople from their parishes to be forwarded by their area vicar and approved by their regional bishop and Cardinal O'Malley. The regional bishops each year nominate from their respective regions a religious and a deacon of similar qualifications to receive the medal. The Central Ministries of the archdiocese also make nominations from among religious, deacons and lay persons who serve on archdiocesan committees or lead important ministries. The cardinal himself selects some recipients.

Cardinal O'Malley explained the significance of the award in his homily to the nearly-full pews of the cathedral's 1,700 seat layout.

"Today, we honor people who have served the Church in so many different ways: in prison ministry, pro-life ministry, teaching CCD classes, visiting the sick, working in the parishes and the agencies, doing so many tasks, selflessly and generously, to bring Christ's love to those in need," he said.

Director of the Pro-Life office of the archdiocese Marianne Luthin received the Cheverus award for her work on Project Rachel, an archdiocese ministry supporting men and women personally affected by abortion. In an interview with The Pilot, she gave priority to the beauty of the award ceremony.

"It was a great honor to receive the award for my work on Project Rachel," she said. "The celebration of vespers was extraordinarily beautiful. The full cathedral made it so beautiful to see so many to come in support of the nominees."

Luthin recently traveled to Baltimore to share ideas on the ministry of Project Rachel with the bishops of the United States at their annual fall meeting.

Shawn Carr, 44, expressed support for his mother Lillian Carr in her ministry to the sick, bringing communion to people at home, and teaching CCD to young parishioners at St. Thomas Aquinas Parish in Nahant.

"It was very tough to get away with anything in CCD, as a kid," he said. "She spent a long time helping people, others, and not thinking about herself. Everything came to fruition. It was a big day for her."

George Gambale, 82, received the award for his work in and around Our Lady of the Assumption Parish in East Boston. Over the years he has served his church in a variety of roles, including teaching CCD classes as a 15-year-old.

"In those days kids did a lot more events things, in my generation," he said. "We grew up in, like now, tough times. I think some good will come out of today too."

His statement gave credit to the youth of the current time, in their ministry and faith. Others at the reception -- including another honoree -- praised his work in the faith.

"He's been the glue that's kept our parish together," said Brian Christopolos, 53, a parishioner and friend of Gambale at Our Lady of the Assumption.

Christopolos credited Gambale with picking up much of the parish duties when the church was without a pastor for two years.

Gambale's cousin Augustine Chiango, 73, who received the Cheverus Award for his work at St. Rose of Lima Parish, Topsfield spoke about Gambale's influence on his faith.

"Since I was 7 years old, he made sure I made it to church every Sunday," Chiango said of Gambale.

Cardinal O'Malley pointed to the longevity of service given to the Church and to the people of God by each of the recipients.

"It's a recognition of all the goodness that exists in our communities," the cardinal told The Pilot. "There was one lady who came up today with her pastor, and the pastor proudly told me that she was 99 years old, and still working in the church. So, I mean, these are people who give literally centuries of service to God's people and often times it's done in a very quiet, unassuming way, doing all the humble tasks that keep our parishes, and agencies, and schools running. Without the work of these people, who we honor today, the Church would be greatly crippled."