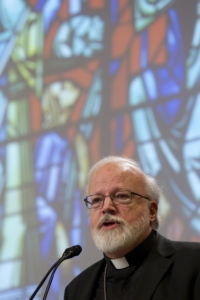 Cardinal Seán P. O'Malley was elected chair-elect of the U.S. Conference of Catholic Bishops Committee on Pro-Life Activities at the bishops' fall gathering in Baltimore Nov. 14.

Cardinal O'Malley was chosen over Archbishop Allen H. Vigneron of Detroit, 149-84. He will replace Cardinal Daniel DiNardo, Archbishop of Galveston-Houston, as the head of the committee in November 2012, when the current term expires.

"I am always humbled by the confidence of my brother bishops," the cardinal told The Pilot by phone interview Nov. 15. "This is a very important committee for all of us. It represents the centerpiece of the social gospel of the Church and in the United States there are so many threats to the Gospel of Life."

Speaking about those threats, the cardinal said that abortion continues to be a very important issue, as thousands of abortions are performed each day with negative consequences for both the children and the adults involved.

"Not only are the lives of the children being robbed from them but the lives of fathers, mothers, and all others involved in abortions are being damaged."

The cardinal said that "all of the issues around religious freedom are paramount." He welcomed the creation of the new Ad Hoc Committee for Religious Liberty under the leadership of Bishop William E. Lori of Bridgeport, Conn., and said those concerns will be shared by his office as well.

The cardinal also referred to the ongoing ballot petition in Massachusetts that is supporting the legalization of physician assisted suicide and described it as the most immediate challenge for the Church in Boston. He praised a recent pastoral letter by the Pro-Life Committee on the matter.

"It is going to be invaluable to us as we engage in this process of formation of our people," he said.