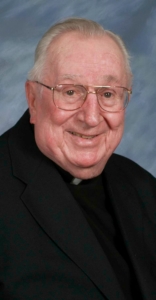 Born in Quincy he was one of the eight children of the late John and Ann (Curney) McAskill. Raised in the Quincy Point section of the city, he attended locals schools and on his graduation from Sacred Heart High School, Weymouth he entered St. John's Seminary. On completion of his seminary studies he was ordained at Holy Cross Cathedral by Archbishop Richard Cushing.

Between May 1950 and February 1958 he would serve as an assistant in five archdiocesan parishes: St. Paul, Wellesley; St. Christine, Marshfield; St. Peter, Plymouth; St. Margaret, Dorchester and Blessed Sacrament, Cambridge.

His next assignment as an assistant was at St. Ann Parish, Somerville where he served from 1958-1976. He made no bones about the fact that he loved that parish; he was a fixture in the minds of many of the parishioners; and that he would gladly have served as the pastor. However, a parish a few miles away needed him and in October, 1976 he was named pastor at Sacred Heart Parish, Medford.

As much as he loved Somerville he seemed to transfer his affections to the Medford parish and served there for the next nearly 18 years before being granted senior priest status and living in residence at St. James Parish, Arlington. Although "retired" he was active in assisting at the Arlington parish for the next ten years before moving to Youville House in Cambridge in February 2004.

A great friend of the Knights of Columbus he served as chaplain of the Medford Council during his tenure there, and subsequently as honorary chaplain of the Arlington Council from his arrival there until his death.

He tendered his resignation to Cardinal Law because of his declining health and the toll of age. He was able to keep up a good pace, nevertheless, and was ready and available up until just a few months ago to assist at St. Camillus in Arlington.

Richard Spinale, a friend of Father McAskill, told The Pilot that "Father Ken had his 60th anniversary here a year ago and he had a steady stream of friends and parishioners greeting him. They loved seeing him come for Mass."

The parish's present pastor, Father James O'Leary who was also the homilist at Father McAskill's Funeral Mass, recalled that he was always happy to welcome Ken, "the people like him and look forward to his folksy homilies and his stories. He loved coming to parish events, and we loved having him."