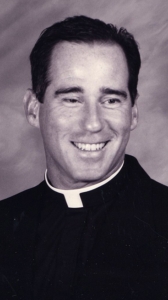 Cardinal Seán P. O'Malley, OFM Cap. has appointed Father Thomas A. Mahoney, until now a Catholic member of the chaplaincy at Massachusetts General Hospital, as the new pastor St. Joseph Parish in Belmont. The appointment is effective on Dec. 8, 2011.

A native of Wellesley where he was raised and attended local schools, he is one of the eight children of Mary and the late Thomas J. Mahoney. He was graduated from the College of the Holy Cross prior to his entering St. John's Seminary.

After a couple of years at the seminary he left, was married to Jill Parrish, and was on the faculty of Archbishop Williams High School, Braintree. His wife, the sister of Father Bryan Parrish who presently serves in the vicar general's office, died in 1992 less than four years into their marriage.

He returned to the seminary two years later and Cardinal Bernard Law ordained him to the priesthood at Holy Cross Cathedral on May 16, 1998. Immediately prior to ordination he served as a deacon at Blessed Sacrament parish in Walpole and his first assignment following ordination was as parochial vicar at Sacred Heart, Middleborough.

When he takes up his new responsibilities at Belmont he will be succeeding Father Albert Faretra who was named pastor at St. Blaise in Bellingham several weeks ago.

Father Mahoney's personal journey of faith, love, and hope as well as his experiences at the two busy parishes he served and the special gifts needed and developed as a hospital chaplain will be a good foundation for his new ministry at Belmont.