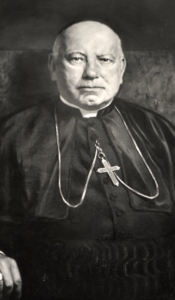 William Henry O'Connell was born on Dec. 8, 1859 in Lowell to John and Bridget (Farrelly) O'Connell, Irish immigrants from County Cavan. His parents immigrated to the United States from Ireland by way of Canada. William was the youngest of his parents' eleven children. According to the 1865 Massachusetts State Census, his six oldest siblings were born in Ireland, the seventh was born in New York, and the remainder were born in Massachusetts. William was only five years of age when his father, a worker in a textile mill, died.

William received his primary and secondary education in the Lowell public schools. While in high school, he had a particular interest in music, especially the organ and the piano. Discerning a vocation to the priesthood, he pursued studies at St. Charles College in Ellicott City, Maryland, from 1876 to 1878. Leaving the seminary, he entered Boston College in the spring of 1879 and completed his studies in 1881, graduating with honors in physics and philosophy. He decided to resume his studies for the priesthood and was sent to the Pontifical North American College in Rome, taking his courses at the Urban College of Propaganda Fide.

On June 7, 1884, Deacon William Henry O'Connell was ordained a priest by Lucido Maria Cardinal Parocchi, Vicar General of Rome. From 1884 to 1895, Father O'Connell engaged in pastoral ministry in the Archdiocese of Boston, first at St. Joseph Parish in Medford and then at St. Joseph Parish in Boston's West End. He spent approximately two years in Medford, a recently founded parish, and upon the death of its pastor, he was transferred to St. Joseph in the West End. His new assignment found him in a busy parish with a wide variety of parish organizations and activities in addition to its regular sacramental life. While engaged in all aspects of parochial life, he was particularly known for his oratorical skills.

In early 1896, Father O'Connell returned to Rome, having been named rector of the Pontifical North American College in December 1895. His selection as rector was widely viewed as a compromise, sidestepping the divergent views of the two other candidates. In 1897 he was named a domestic prelate with the title of Right Reverend Monsignor. During his time in Rome, Msgr. O'Connell cultivated friendships and acquaintances with a good number of important and influential persons. His most enduring friendship was that of Rafael Merry del Val, at one time a secretary to Pope Leo XIII and Secretary of State of Pope St. Pius X.

In the summer of 1900, the renowned bishop of the Diocese of Portland, Maine, James Augustine Healy, was called to his eternal reward. A terna was submitted to the Holy See based on the recommendations of the bishops of the Boston Province and the Portland diocesan consultors as well as the apostolic delegate. The three names on the terna were Irish and the lack of a French candidate caused considerable consternation among the francophone priests of the diocese. After opposition to the priests on the terna was made known to the Holy See, the cardinals of the Sacred Congregation de Propaganda Fide chose to disregard the terna and selected a Massachusetts-born priest fluent in French as the third bishop of Portland: Msgr. William Henry O'Connell, Rector of the Pontifical North American College.

Msgr. O'Connell was named Bishop of Portland on May 14, 1901. He received episcopal ordination on May 19, 1901 in the Corsini Chapel of the Basilica of St. John Lateran from the hands of Francesco Cardinal Satolli, former Apostolic Delegate to the United States and Archpriest of the Basilica Cardinal Satolli was assisted by Archbishop Edmund Stonor, Titular Archbishop of Trapezus, and Archbishop Rafael Merry del Val, Titular Archbishop of Nicaea. According to l' Osservatore Romano of May 21, 1901, Msgr. Francesco Riggi, Prefect of Pontifical Ceremonies, was master of ceremonies for the solemn liturgy and many notable personalities were in attendance including the United States ambassador to Italy with his wife and son, the Austro-Hungarian ambassador to the Holy See, members of the English, German, and Italian aristocracy, a large contingent of the American colony at Rome, and alumni of the Pontifical North American College. After the ceremony, "lavish refreshments" were served under the arches of the basilica's cloister. On May 21st, Bishop O'Connell was received in private audience by Pope Leo XIII. He was installed in Portland's Cathedral of the Immaculate Conception on July 4, 1901. Bishop O'Connell chose ''Vigor in arduis'' (Strength in hard times) as his episcopal motto.

His episcopate in Portland was brief, spanning less than five years. The language issues which surfaced during the process of his selection as Bishop of Portland reoccurred during his episcopate and continued after his promotion as Boston's coadjutor archbishop. In 1905, the Holy See sent Bishop O'Connell on a diplomatic mission to Japan. In that year he was also honored by the Pope with an appointment as an Assistant at the Pontifical Throne.

On Feb. 6, 1906, Bishop O'Connell was appointed Coadjutor Archbishop of Boston with the right of succession and named Titular Archbishop of Constantia in Scythia. He succeeded to the Metropolitan See of Boston on Aug. 30, 1907. The pallium was postulated for him from Pope St. Pius X in the consistory of Dec. 19, 1907.

Archbishop O'Connell was created a cardinal by Pope St. Pius X in the consistory of Nov. 27, 1911. Among the others created cardinals in the same consistory were Archbishop Diomede Falconio, OFM, Apostolic Delegate to the United States, Archbishop John Murphy Farley of New York, and Archbishop Francis Bourne of Westminster. Cardinal O'Connell received the red hat and the presbyteral title of San Clemente on Nov. 30, 1911.

When he became Archbishop of Boston 1907, the Catholic population of the Archdiocese was approximately 750,000, served by 493 diocesan priests, 134 religious priests, 140 religious brothers, and 1,567 women religious, serving in 209 parish churches and 50 mission churches, with more than 49,000 students in parochial schools. (source: The Official Catholic Directory, 1908).

Cardinal O'Connell was well-known for the strength of his convictions and for his strong defense of the interests of the Church. So strong was his moral and political influence in Massachusetts, that his nickname was "Number One." He was outspoken in defense of morals and modesty, opposing birth control, state-promoted gambling, atheism, and similar subjects.

His episcopate was marred by a major scandal: the secret marriage of his nephew, Msgr. James O'Connell, whom he had appointed chancellor of the archdiocese. Msgr. O'Connell was married in 1913 but managed to keep his marriage secret for several years. As reports of the marriage began to circulate, Archbishop Giovanni Bonzano, the Apostolic Delegate, conducted an investigation which led to Msgr. O'Connell's removal from ministry and excommunication in 1920. The extent of Cardinal O'Connell's knowledge of the marriage has not been determined with certainty. As a result of the scandal, the cardinal's influence in the Church at a national level was diminished.

While attempts were made by several of his contemporaries in the U.S. episcopate to have him removed as archbishop, Cardinal O'Connell remained as Archbishop of Boston until his death in his Brighton residence on April 22, 1944.

On April 28, 1944, Cardinal O'Connell was interred in the Chapel of the Immaculate Conception which he had constructed on the grounds of St. John's Seminary as his final resting place. With the 2007 sale of the seminary and archdiocesan property to his alma mater, Boston College, the chapel then became the college's property. In July 2011 the chapel was razed and the cardinal's body was moved to another property which is nearer to the remaining seminary building, St. John Hall.