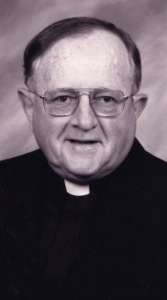 Father Charles P. Weber, a Lynn native died at St. Elizabeth Hospital in Brighton on Nov. 2. He had just celebrated his 80th birthday on Oct. 13.

A son of the late Alfred and Helen (Curtin) Weber he was graduated from Sacred Heart grammar and St. Mary Boy's High School both in Lynn. Following his seminary studies he was ordained to the priesthood at Holy Cross Cathedral on Feb. 2, 1957 by Archbishop Richard Cushing. He also earned a Masters degree in Arts (English Literature) at Boston College.

In 1968 he was named Chaplain at Cambridge's Matignon High School, living in residence at Immaculate Conception Rectory; and from 1968 to 1970 he was on the faculty of St. Sebastian School, then located in Brighton. Between 1970 and 1978 he was the chaplain of the Grey Nuns at their convent in Lexington.

In September 1978 he returned to parish ministry as a member of a team ministry at St. Edward the Confessor Parish in Medfield. In 1985 he was named the moderator of the Team Ministry at Medfield.

In Medfield the team of Father Weber and Father Philip DesRosiers had the pleasant news of a very rapidly growing parish community which required first the building of a multi-purpose parish facility and then of a new parish church. Both projects were accomplished and the team was there for the Oct. 13, 1980 dedication of the new church by Humberto Cardinal Medeiros. It was an appropriate 49th birthday present for Father Weber.

The team remained at St. Edward for the next ten years shaping another generation of parishioners in its new home. In May 1990 poor health required Father Weber to leave the team and he was granted disability status and in August 2000, senior priest status.

In retirement he lived in Sanbornville, N.H. and as his health permitted he assisted in area parishes St. Anthony, Sanbornville; St. Joseph, Ossipee, and St. Therese of Lisieux, Sanford, Maine. Before moving more permanently to New Hampshire he helped out at St. Joseph, Everett.