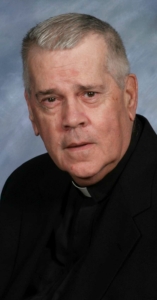 A Boston native who was raised in Somerville and was graduated from St. Clement High School there, Father Arthur J. DePietro died on Oct. 31 at Don Orione Home in East Boston. He had been at Don Orione for several years during a long and lingering illness.

He was a son of the late Arthur and Josephine (Judge) DePietro and brother of James of Quincy.

Following graduation from St. Clement High, he attended Merrimack College in North Andover for two years and then entered St. John's Seminary. Cardinal Richard Cushing ordained him to the priesthood at Holy Cross Cathedral on Feb. 2, 1963. He was assigned as an assistant in two parishes, Our Lady of Grace, Chelsea (1963-1964) and Blessed Sacrament, Walpole (1964) before being named chaplain at Marian Manor in South Boston where he served until 1979.

In 1978 he took on another, very different kind of chaplaincy, that of Boston Juvenile Court becoming the following year the Chief Juvenile Court Chaplain for which he served for the next two decades. He also taught in the criminal justice program at Northeastern University.

During the court chaplaincies he lived in residence at two Hub rectories, St. Catherine of Siena, Charlestown and later at Holy Trinity (German) in Boston's South End.

In August 2000 he was granted a health leave and a few months later disability status as his health continued to deteriorate. During this time he was able to assist with chaplain duties at Don Orione Home in East Boston. He was granted senior priest status in July 2002 and in the ensuing years he was in the care of the priests and staff of Don Orione Home.