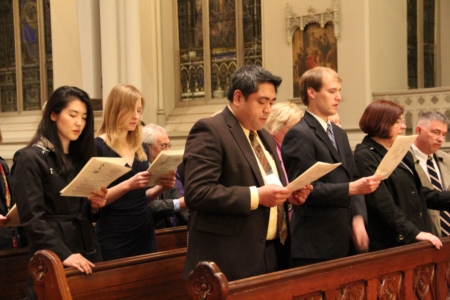 SOUTH END -- Cardinal Seán P. O'Malley urged Catholic medical professionals to be courageous in their opposition to a measure that would legalize assisted suicide in Massachusetts at their annual "White Mass" held Oct. 29 at the Cathedral of the Holy Cross.

"Physician assisted suicide has been resisted in many states, but this new Hemlock Society sees Massachusetts as low hanging fruit. We must show them that that fruit is a prickly pear," said Cardinal O'Malley, referring to the organization behind the initiative.

The Mass was part of "The Catholic Physician in the Secular World" conference organized by the archdiocese's Guild of St. Luke for Catholic physicians.

On Sept. 7, an initiative petition was certified, supporting the so-called "Massachusetts Death with Dignity Act." The initiative, if passed into law, would allow terminally-ill adults to end their lives by receiving lethal drugs from a physician, which would be self-administered.

The cardinal said in his homily that even as the Mass was taking place, people were collecting signatures in support of the practice.

If the initiative petition receives around 69,000 signatures of registered voters, it would pass a major milestone on making its way to the fall 2012 ballot.

The cardinal cited a recent talk at Harvard Medical School by Kathryn Tucker, the legal affairs director of Compassion and Choices -- a leading advocacy group for physician assisted suicide.

The cardinal said that in her talk Tucker stressed the importance of objecting to the term physician assisted suicide, instead calling it "aid in dying."

He said that Tucker advocated a standard medical procedure where a "competent and reasonable" person has a right to help in dying that includes sedation, palliative care, removal of food and water and "drugs that hasten or bring about death."

According to the cardinal, Tucker would also like depression to be redefined, so it would not be "an obstacle to prescribing lethal drugs" and "would like to marginalize the influence of organizations who represent persons with disabilities, because they oppose physician assisted suicide."

Compassion and Choices wants to create a legal environment in which doctors can prescribe lethal drugs without fearing prosecution, while also intimidating institutions who do not offer "the full range of end of life options" with the fear of legal and financial reprisals, the cardinal said.

As he did in September's "Red Mass" for legal professionals, the cardinal cited the experience of the State of Oregon, where physician assisted suicide is legal. He said that Oregon's suicide rate has climbed 35 percent higher than the national average, even without including legally assisted suicides.

"Physician assisted suicide will only serve to corrupt the medical profession and turn our caregivers into executioners. It also puts great pressure on those who are seriously ill, who can be made to feel guilty or foolish for not jumping at the chance to be put down," the cardinal stated.

He also said that some from the Harvard University community and the New England Journal of Medicine "are lending the prestige of those institutions to promote this practice. They will muster great resources and impressive amounts of money to try to seduce our people."

Cardinal O'Malley said it is important that Catholic doctors and other health care workers "who take the Hippocratic Oath seriously," have their voices heard.

He said the medical workers have a "very precious vocation" involved with healing and protecting life and that "more than ever" Catholic health care workers need to be "men and women of prayer," to persevere in their vocation.

The cardinal referred to the words of Blessed Mother Teresa, calling the sick and the dying patient "Christ in the distressing disguise."

"It's an opportunity for us to witness to our love for God and neighbor. We must not retreat into the witness protection program; we must stand up and be counted," said the cardinal.

"A massive education project is necessary to help our people understand the issues that are at stake. To carry this out, we need the active participation of Catholic health care workers," he said.