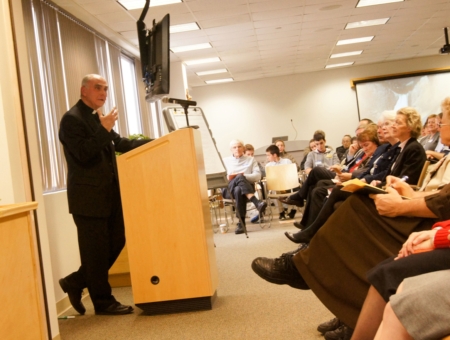 At the Third Annual Archdiocesan Justice Convocation, Oct. 29, entitled Spirituality and Justice, Catholics throughout the archdiocese came together in the spirit of faith to discuss and explore some of the difficult social issues facing the world today.

After an introduction at the Archdiocesan Pastoral Center in Braintree and the keynote, participants broke into smaller groups focusing on immigration and refugees, physician-assisted suicide, environmental justice, global poverty and fair trade, respect for life, human trafficking, peace and justice, and workers rights.

With a keynote address from Father J. Bryan Hehir, Archdiocese of Boston cabinet secretary for health and social services, the conference bundled the wide variety of societal challenges into a call for action.

With the introduction of the changes affecting the climate at this time, Father Hehir addressed the relationship between faith and the science that allows humanity to explore these issues.

"Faith and reason are never in conflict," he said. "Faith brings us beyond reason, but never beneath it."

The diverse range of topics included subjects such as fair trade and respect for life. Father Hehir told the audience that even though issues like these sometimes appear on opposite ends of a political discussion, as matters of faith they are still evils or ills upon our world and require an act of healing, or "laying hands on life," as he described it.

As a matter of faith Catholics are called to visit prisoners, clothe the naked, feed the hungry, serve as steward to creation, and protect natural human life, the keynote speaker explained. But he untangled the moral imperatives from politics in his call to action.

"This kind of work is direct, concrete, specific, and endless," he said.

After the keynote address, each of the breakout session leaders took the podium to address and direct those interested in each of the subjects. Each introduced the topic they intended to address in the smaller sessions. Organizers asked the participants to join different groups, if the group discussing their area of interest was full.

Some participants expressed surprise at the subjects covered in the breakout sessions.

"I was interested in the term 'environmental justice' and trying to figure out: what does that mean?" Eileen C. Hannon, 63, who attends St. Catherine of Siena in Norwood, said. "What took me by surprise, I think, is that it really has been part of the Catholic faith agenda."

Daniel Di Leo, project manager for the Catholic Coalition on Climate Change, demonstrated the idea of stewardship over creation as part of the Catholic calling. He also created his session based on a framework of the worldview of St. Francis. He pointed to the effects of environmental degradation on the lives of poor people around the world --who contribute the least to the problem, but suffer the damages from it the most.

"When we made this connection, I started to see how this environmental issue really was just a matter of connecting the dots," he said. "You know if we're going to think about issues of poverty, we can't separate that from issues of environment."

Just down the hall, Marjean Perhot, director of refugee and immigrant services for Catholic Charities, and Sister Marie Prefontaine addressed the issue as one of people in need, and that the faithful should attempt to alleviate suffering on a global scale. They focused on the issue not as a political problem, but a human-rights problem which impacts the lives of individuals, not just large groups or populations.

"Often times in our refugee situations we end up with numbers, you know. This large number of refugees, and we forget -- in our policy-making, in our policy-living -- that we're trying to promote the dignity of each human person," said Sister Marie.

After the breakout sessions the crowd gathered in the chapel to celebrate the Mass, led by Cardinal Seán P. O'Malley. The cardinal felt that the gathering provided an important juncture to discuss the issues facing the modern Church and the faithful.

"As a Christian people we believe that God is in charge of everything, and he will take care of us, but he expects us to do our part," said the cardinal, before the Mass.

"A conference like this is an opportunity for us to delve into the social gospel and understand that being a Catholic is a way of life."

"It's not just coming to Church on Sunday, although we come to Church on Sunday to find the inspiration that we need to carry out the mandates of justice, and mercy, and charity that need to be the way that we witness to our faith."

Following Mass, the group broke again into the smaller groups to discuss human trafficking, peace and justice, workers rights, and the prison ministry.

After the additional breakout sessions Father David Couturier delivered a plenary session. He outlined a way forward and best practices for establishing social justice committees on a parish level.

Father Hehir spoke about the moral imperative of addressing these contemporary and pressing issues through such events in the archdiocese.

"The moral imperative is in every time for the Church," he said. "The work of justice and peace is a constant imperative for the whole Church."

"I often like to say that the three great imperatives for us are scripture, sacraments, and the social teaching. Those three elements are always at the core of what it is to be Catholic."

He said these three elements form the core but should not exhaust what it means to be Catholic.

"I think the times we're in -- as in every age of the Church -- have their own unique demands."

He described a need for justice within the United States economy, and the pursuit of justice across the world. He equated justice with fairness, and said the world has a unique opportunity to define justice in terms of fairness. He also spoke about the imperative for the American Church to take a leadership role in these times.

"These are all kinds of things that the Church in the United States has a special responsibility to teach about, to encourage Catholics as citizens to be informed citizens and active citizens with the vision of the social teaching as part-and-parcel of their Catholic heritage."

Pat Dineen, chair of the social justice committee for the Archdiocesan Pastoral Council said organizer Mary Ann McLaughlin, director of spiritual life in the Office of Worship and Spiritual Life, played an important part in moving the convocation forward into its third year.

"It's turned into an incredible kind of partnership of people getting together and collaborating on many levels," said McLaughlin.