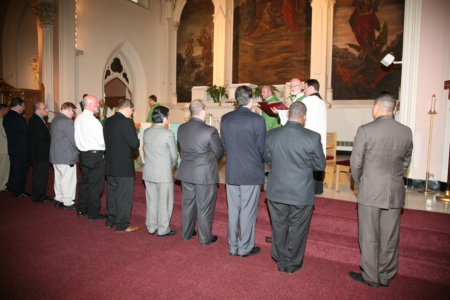 'Later that day (10/22), I went to a Mass for candidates for the permanent diaconate in Peabody.' Pilot photo/CardinalSeansBlog.org

... I attended (10/20) Cathedral High School's Partnership for Success dinner at the Renaissance Boston Waterfront Hotel. This was the 10th anniversary of this dinner to raise money for scholarships to the high school. Mr. John Remondi was honored for the extraordinary work he has done to support Cathedral High. They had a wonderful video and one of the students spoke and gave a very inspiring talk. ...It is because of John's efforts and the help of other alumni of Cathedral High that the school has not only survived, but is flourishing. They have raised many millions of dollars, built a new gymnasium and new science labs and put a new roof on the building. Everyone is so grateful to his dedication and it was wonderful to see him there with his wife Dotty and their beautiful family. He told his story of his mother being an immigrant from Italy and how they had to struggle when they came to America and what an important factor Catholic education was in his own life. He is truly a man who is giving back in a big way.

[On 10/22] I went to a Mass for candidates for the permanent diaconate in Peabody. Now we are ordaining deacons every year, and this particular class has six Hispanics, one Brazilian and one Vietnamese, so the different ethnic groups of the diocese were very well represented. Of course, Deacons Dan Burns and Pat Guerrini from our Diaconal Life Office were with me for the Mass.

[On 10/23] I went to another event related to the missions: the St. James Society's Cushing Award Banquet held at BC High. There were three honorees: Bill Burke of St. Sebastian's School, Sister Janet Eisner of Emmanuel College, and Father John Unni of St. Cecilia Parish. During the evening they showed an excellent film about the St. James Society! None of us had seen it before and they had lots of old photos with Cardinal Cushing and the first missionaries -- it was wonderful!

On Tuesday (10/25), I was invited to spend a day at Boston College. My visit was coordinated through the Church in the 21st Century Center with Father William Leahy, the president of BC I had Mass at St. Mary's Church at noon and in the afternoon I met with professors and staff members from such areas as the vice president of mission and the chaplaincy office. Then in the afternoon, I gave a talk that was open to the student body. I was delighted by the wonderful attendance. The subject of my talk was the Eucharist and the need to evangelize and to look for ways to invite young people to be a part of our worshipping community. There was also a dinner hosted by Father Leahy with representatives from different components of the university as well as some students. Even at the dinner, we had a discussion about the pastoral concerns and formational concerns of our young people. We're very grateful in Father Leahy's interest in promoting the Catholic identity of Boston College and also all of the help that he's given to us in the revitalization of our parochial schools, as well as a very generous policy they've had in giving scholarships to priests of the archdiocese studying there.