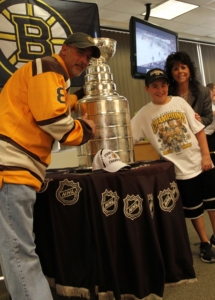 Mark, Dorando, 11, and Robin Mobley are pictured with the Stanley Cup. The championship trophy won by the Boston Bruins in June was at the Archdiocesan Pastoral Center on Oct. 20. Pilot photo/Justin Bell

BRAINTREE -- As the Stanley Cup visited the Pastoral Center Oct. 20 Cardinal Seán P. O'Malley recalled the wager with the archbishop of this year's losing team from Vancouver.

"Well, we were all very pleased and very proud of the Bruins and I can't wait to send this picture to Archbishop Miller of Vancouver," said Cardinal O'Malley.

The archbishops of Boston and Vancouver made a friendly wager; whosever team won the cup would receive $100 for their diocese's Catholic Charities organization. On hand to note the donation was president of Catholic Charities in Boston, Debbie Rambo.

"With a $100 at Catholic Charities we can feed a family of four for a month. So it's really a generous gift and helped a wonderful family," said Rambo.

The Boston Bruins made the cup's visit possible by winning the 2011 National League Hockey Stanley Cup Finals in seven games over the Vancouver Canucks on June 15. Awarded to the yearly champions of the NHL, the Stanley Cup usually draws a crowd wherever it goes and the midday visit to the headquarters of the Archdiocese of Boston was no exception.

Accompanied by one of the four, "Keepers of the Cup" from the Hockey Hall of Fame in Toronto and two deputy sheriffs from Middlesex County, the historic trophy had a continuous receiving line of Pastoral Center employees and their friends and family who waited to have their pictures taken with the trophy.

Beyond the more official remarks, the visit of one of the world's most recognizable trophies drew memories and emotion from Bruins fans and hockey fans in general. Unlike trophies that are created each year for winning professional football, basketball and baseball teams, the Stanley Cup travels from winning team to winning team, under the jurisdiction of the NHL and two trustees. Each year, the championship team has their names engraved into removable bands on the Cup made of silver and nickel alloy. The bands remain for at least 58 years and are then transferred to the Hockey Hall of Fame, making room for new champions.

Growing up, Deb Dillon, director of property services for the archdiocese, attended Bruins games on Sunday nights with her father who had season tickets. Dillon still has programs from those games where she would write statistics after the 3rd period with the help of her dad.

"It's surreal, it's unbelievable that it's here," said Dillon about the cup.

For Father Bryan Parrish, the archdiocesan assistant vicar for administration and special assistant to the vicar general, the Stanley Cup's visit to the Archdiocesan Pastoral Center on Oct. 20 created another special memory for him and his dad Stan.

Father Parrish was able to see the Bruins win the 1970 Finals with his father Stan -- in person, at the Garden -- when the young Bruin Bobby Orr leapt horizontally after scoring the winning goal in overtime. Father Parrish, who played hockey along with this brother Mark, called the moment, "one of the most exciting parts of my childhood."

In June, Father Parrish was in Rome leading a pilgrimage for students of Xavieran Brothers High School when the Bruins played Game 7. A group of about 25 students and 4 chaperones managed to secure viewing of the 3rd period on the Internet through one of the student's laptops.

After the game, Father Parrish called both his father and brother, who were also emotional. Not wanting to attempt sleep, walked to nearby St. Peter's Basilica and offered a prayer of thanksgiving for the victory.

One place where people had not heard of ice hockey, let alone the Stanley Cup, was in rural eastern Zambia where Maureen Crowley Heil found herself on a mission trip this June when the Bruins were in the finals. Director of programs and development for the Pontifical Mission Societies, Heil grew up in Hudson and considers herself a "huge fan" of the Bruins. Heil works out of the Pastoral Center and saw the cup during its visit.

In June, her husband would text game results to Heil, who found herself with the challenging task of describing the sport to the Zambians, whose experience of ice is minimal in a place where water is held at a premium.

"There I am trying to explain that they freeze this big thing of water into ice, people strap on blades on the bottom of their boots and then slide on them while they hold sticks and hit this small little disk into a net. They were looking at me like I was crazy, it was amazing," said Heil.

Nonetheless, she was able to convey the message of world championship to her friends who were familiar with the World Cup. In turn, they bought her a chitenge, or traditional wrap dress. The chitenge's colors: black, white and gold, the team colors of the champion Bruins.

The original Stanley Cup was purchased and donated by Frederick Arthur Stanley, the Governor General of Canada and awarded for the first time in 1893 to the Montreal Hockey Club. One of Stanley's stipulations for the cup is that it would be a challenge cup and not the property of any one team. The Stanley Cup that visited the Pastoral Center was the "presentation cup" that is awarded to the winning NHL team on the ice and then travels to the team's contingencies. There is another like it in the Hockey Hall of Fame along with the original.