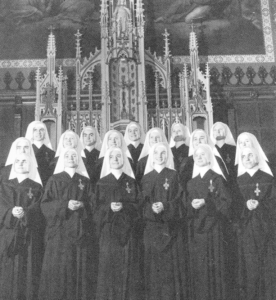 As we reflect on World Mission Sunday, this series of articles on missionary communities located within the Boston Archdiocese holds a special place for The Holy Union Sisters. What's interesting about this religious congregation, now celebrating its 125th anniversary in the United States, is that these sisters first came to this country themselves as missionaries to aid struggling immigrants from Europe.

Ten Holy Union Sisters arrived in Fall River, then a part of the archdiocese, to establish Sacred Heart School on Oct. 19, 1886. The Sisters must have presented some interesting challenges to Father Matthias McCabe who had invited them. Nine of the ten Sisters couldn't speak a word of English. Translations were left to Sister Mary Eucharia, an Irish sister who knew some French. Nevertheless, within ten years this small missionary community grew in numbers to establish boarding schools in Fall River and Pawtucket, Rhode Island, as well as elementary schools in Taunton, Cambridge, Lawrence, and Chelsea. By the 1920s, the sisters moved beyond New England to states as far south as Florida. By 1946, there were more than 500 American Holy Union Sisters staffing 30 schools. Presently, Holy Union Sisters are active in Ayer, Brockton, Chelmsford, Groton, Lawrence, Lowell, Mattapan, Somerville, and Tewksbury.

The actual foundation of the Holy Union Sisters traces back to 1826 in the turbulent years following the French Revolution to the little parish of St. Jacques of Douai, France. As it happened, four pious women banded together to teach the poor girls of the parish valuable needlework skills so they could find employment among the wealthier families. More than that, these four women recited the Rosary at daily Mass and on Sundays they gathered with other women to sing hymns and pray with them.

When the newly ordained Abbe' Jean Baptiste Debrabant arrived at St. Jacques, he became their spiritual guide and named them the "Holy Union." By 1832, the group had grown to 15 women including Eulalie Ramon, the educated daughter of a Douai lawyer. Now, the curriculum expanded from linen keeping and catechetics to reading and writing. By 1850 when Sister Eulalie was elected the community's first Superior General, the congregation had grown to 700 Sisters.

In the United States, the magnificent missionary spirit of the Holy Union Sisters continues among the poor, particularly women, children, and people in need. Today, Holy Union Sisters continue to work with new immigrant populations. They work in the Boston Archdiocese as administrators, chaplains, consultants, prison ministers, and in a whole array of social services wherever a human need presents itself.