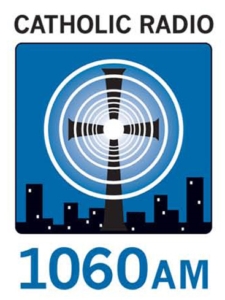 It is a great joy on All Saints Day to celebrate with 1060AM WQOM its first anniversary. 24/7 Catholic radio is a gift to everyone that seeks to explore the Catholic faith more deeply. It allows us to discuss Catholic life and teaching in a conversational way and it reaches Catholics and non-Catholics, believers and non-believers, and everyone in between.

A few days after Cardinal Seán announced the establishment of the Catholic Media Secretariat in May of 2010, I received a call from Jim Wright, founder of the Station of the Cross radio network in Buffalo, NY. The Station of the Cross began their upstate New York radio apostolate in 1999 after a request from Mother Angelica at EWTN and was already operating Catholic radio stations in Buffalo and Rochester. Jim's interest in launching a Catholic radio station in Boston fulfilled one of Cardinal Seán's hopes for the Media Secretariat -- that we could partner with a Catholic radio network and support a strong Catholic radio presence in the area.

WQOM has been a blessing to local Catholics and the archdiocese from day one. The station's first hour on air was a Mass celebrated by Cardinal Seán at the Cathedral of the Holy Cross on All Saints Day last year. Commuters then saw beautiful billboards along the major highways of the area promoting the message of Catholic radio. Since then, listenership has grown quickly. Nearly everyone that I meet as I travel around the region has tuned into 1060AM and there have been so many moving testimonials. Many moms call and say they listen in the car as they pick up kids from school and drive them to afternoon activities. Some seniors that are home much of the day have written to say they listen regularly and pray for all the show hosts. Seminarians have told me that they tune in when they take a break from their studies because it connects them to the community they'll serve one-day. One of my personal favorites is hearing from prison chaplains who report that many prisoners listen regularly.

We inaugurated WQOM's first local live program, The Good Catholic Life, this past Ash Wednesday. The show is produced by our Catholic Media Secretariat and airs each weekday from 4-5 p.m. On the show we share information about local Catholic initiatives and events, explain Catholic teaching, profile Catholic leaders and ministries, and discuss current local and global news in the Catholic Church. Co-hosting the show, I have learned so much about our great faith and have been truly inspired by the witness of the guests on our show. There are five ways to listen to the program: it broadcasts live on 1060AM, on WQOM.org, and on the iCatholicRadio app for your smartphone. To listen to a recording of any of our shows, you can visit our website, TheGoodCatholicLife.com, or download a daily podcast via iTunes. There are also ways to sign-up for a daily email or to follow us on Twitter or Facebook to receive a link to the show audio each day. Thanks to everyone who has listened already.

As a way to celebrate the one year anniversary of Catholic radio in Boston, WQOM is hosting a one-day Advent conference on Saturday, Dec. 10 at Lowell Memorial Auditorium. WQOM has invited 4 great speakers including EWTN-radio show hosts Father Mitch Pacwa, Brian Patrick, and Dr. Ray Guarendi, as well as Sister Olga Yaqob from our archdiocese. Cardinal Seán will celebrate Mass with the 2,800 attendees. The conference, entitled "Prepare the Way," is a great opportunity for all of us to live the Advent season as we will listen to inspiring talks that will better prepare our hearts to celebrate the day our Lord came into the world. I'll be the emcee for the conference so I hope that you will join me there. For more information or to order tickets please visit WQOM.org or call 877-888-6279.

Next week on Nov. 2-5, WQOM will hold its fall fund drive in celebration of its first anniversary. Jim Wright and the Station of the Cross made the initial investment to bring Catholic radio to Boston. It is now up to our Catholic community through our donations to keep it on the air. If you listen to and support Catholic radio, please join me and make a contribution next week. Every gift makes a difference.

Fifteen years ago, there were only 7 Catholic radio stations within the United States. Now there are 180. We give thanks today for all those that have made this growth possible through their actions, prayers and financial support, and we specifically are grateful for the gift of Catholic radio in Boston.

Scot Landry is Secretary for Catholic Media of the Archdiocese of Boston.