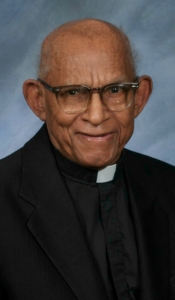 He had been the longest ordained priest of the archdiocese for a number of years, but had been the oldest priest for only about two weeks, following the death of Msgr. Stan Sypek. Father Paul R. Francis died at Regina Cleri Residence on Oct. 16 following a period of declining health.

He was born in Dangriga, British Honduras, now Belize, on June 15, 1915. He was the surviving sibling of the four children of the late George and Beatrice (Laidman) Francis. Following education in his native land, he began studies for the priesthood in Rome at the world wide missionary seminary in the Eternal City -- the Propaganda Fidei. During the immediate pre WWII era and during the war he continued his studies and was awarded Bachelor of Philosophy, Bachelor of Canon Law, and finally a Doctorate in Sacred Theology.

Cardinal Peitro Fumasoni-Biondi, who was the prefect of the Propaganda Fidei -- or Propagation of the Faith ordained him to the priesthood in Rome on Dec. 22, 1941. The cardinal had served previously as apostolic delegate in the United States. When he was ordained it was as a priest of the then vicariate apostolic of British Honduras, now the diocese of Belize-Belmopan. The vicar apostolic was a native son of the archdiocese, Bishop William A. Rice, SJ. At the time Father Francis probably did not know that there was a prophecy in the persons of his ordaining bishop and his own diocesan bishop.

On his return to Belize following WWII he served in that diocese until he came to the US and the archdiocese in 1959. His assignment was as an assistant at St. Francis de Sales in Roxbury (1959-1966). He was only three months at the parish when he was incardinated as priest of the Boston archdiocese on Dec. 7, 1959.

In the following years he served as an assistant at Holy Cross Cathedral (1966-1967); Sacred Heart, Weymouth (1967-1982); and as pastor of St. Theresa of Lisieux parish in Revere. Cardinal Law accepted his request to retire in July 1988; he lived briefly at St. Bernadette Parish, Randolph before moving to Regina Cleri in September 1988.

In the parishes he was greatly loved and appreciated for his priestly wisdom and advice. At Regina Cleri he was kind of a renaissance man. Central Regional Bishop Robert Hennessey said "it was great to sit with him at dinner. He could (and apparently relished) chatting about any topic; and was well informed about a huge number of issues and ideas."

Father Francis was predeceased by his siblings Sister Barbara Marie, SSF; William and Gwendolyn. He is survived by a large family of nieces and nephews; and friends from the parishes he served over the years. Following the Funeral Mass Father Francis was buried in St. Francis Xavier Cemetery, Weymouth.