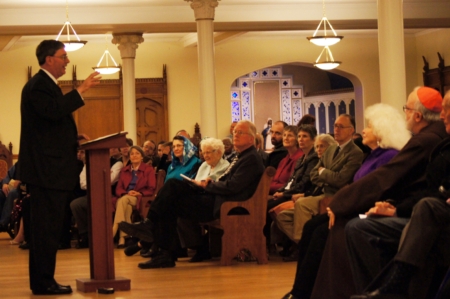 George Weigel, a U.S. biographer of Pope John Paul II, speaks on the late pope's life and legacy at the Cathedral of the Holy Cross in Boston Oct. 20. Pilot photo/Christopher S. Pineo

SOUTH END -- In the basement chapel of the Cathedral of the Holy Cross, the biographer of the last pontiff delivered a speech to the gathered Oct. 22, telling of a Church-leader whose spiritual core defined him. Over 400 people crowded the pews, overfilled extra seats, and stood near the back of the chapel to hear the talk.

George Weigel, Distinguished Senior Fellow of the Ethics and Public Policy Center in Washington, D.C., presented "Remembering John Paul II: A Saint for our Times." He described the process of getting to know the pope as his biographer over the course of 15 years.

"He said to me, while walking down to dinner one night, in reference to other attempts to explain him. 'You know they tried to understand me from the outside, but I can only be understood from the inside.' And, in retrospect, that was a little nudge he was giving me," Weigel said.

Weigel described the late pope as a man whose experiences formed his beliefs and shaped the sharing of himself with the world.

"Everything that he did as a priest, as a bishop, as a philosopher, as a sportsman, as a pope, as a figure on the world stage, all of that was an expression in one way or another of what was inside him."

Weigel pointed to four internal parts of the Holy Father that drove his existence. He defined the pope as a radically converted Christian disciple, a believer in culture as a historical catalyst, holding a combination of intellectual security and intellectual curiosity, with a belief in the Church as a body defined by the mission of evangelization and spreading the truth.

In the radical conversion vein, he described the pressure from World War II as taking a toll on the Pope.

"He became a kind of diamond, who could cut through things that others felt were simply impermeable, like for example, The Berlin Wall," Weigel said.

Weigel said the Pope's strength came from a commitment to what St. Paul calls in 1 Corinthians "the more excellent way," a path to God, unattainable without love.

"The more excellent way for Christian love is not just truth to Christians and truth for people living with them, it's truth for the world."

Weigel said that love is what Pope John Paul II shared with the world. He said the pontiff took the principle as the real light of the world.

The pope expressed this in his belief that human history could be shaped by forces greater than politics or economics. He believed more in the power of culture to advance the human historical narrative, Weigel said.

"He learned that through his experience in Poland," Weigel said.

Born Karol Jozef Wojtyla in Poland in 1920, he survived the turmoil racking his homeland through WWII.

"The historic state that had existed since the end of the first millennium was eradicated from the map of Europe in 1795, and finally partitioned by the three great powers of the neighborhood: Russia, Prussia, and Austria."

"And yet Poland the nation endured for 123 years."

Weigel said the survival of the Polish state came as the result of the people's preservation of their language, literature, and way of living.

He went on to describe how the pope dedicated himself to the pursuit of truth through various studies beyond religion and extending even into the sciences.

"He was so convinced that truth -- from whatever source -- mathematical, physics, theology, philosophy, culture, truth from wherever, all those truths pointed towards the one truth, capital T."

Weigel described the subject of his new book "The End and the Beginning: Pope John Paul II, the Victory of Freedom, the Last Years, the Legacy" as having such unshakable faith in the Truth, that he could confidently and respectfully use reason to engage with people of any faith on any subject.

"It's a truth-based faith," Weigel said. "It's not being nice to be nice."

The pope took his belief in the mission of the Church through the media to the world.

"More people saw him live than saw anyone else in the history of the world," Weigel said.

Weigel described advances in communication and transportation facilitating this development as the pope repeatedly took the world stage.