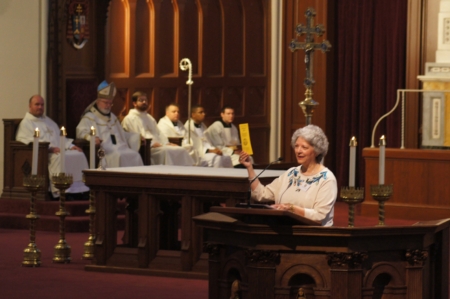 Now in its third year, Serra encourages people to "spiritually adopt" a priest by receiving a sealed envelope with the priest's information inside including address, photo, and birthday. The program encourages eucharistic adoration, praying the rosary, offering Communion, fasting, remembering special days with a greeting card, or praying the Divine Mercy Chaplet for the "adopted" priest.

Loretta Gallagher, president of Serra Boston, explained the effort to support priests in their calling, encouraging not donations of money but of time. She asked adopters to keep in contact with their priests, recommending letters acknowledging birthdays, anniversaries, and important life events of the ordained. She advised adopters to begin correspondence on Priesthood Sunday, the last Sunday of October, and to continue through to the following year.

"Please remember this is not a pen-pal endeavor," Gallagher said. "It is purely a one-way gift of love to our priests. You may -- or may not ever -- receive acknowledgement of your correspondence."

"So it is important to remember that this effort exists simply to affirm, encourage and spiritually support our priests."

"It gives the priest a chance to say, 'Gee you know somebody is remembering me every day,' and they know who it is," Gallagher said in a phone interview.

She invited those attending the Mass to sign up immediately, encouraging groups or individuals to fill out a registration form after the Mass at the cathedral entrance. Serra offered magnets, a booklet, and calendars to buy, with proceeds going to benefit priests.

In his light-hearted homily, Cardinal O'Malley referenced both the first pope and Blessed Pope John Paul II to anchor a message on the difficulty faced by men called to do the work of God.

"The New Testament tells us so much about our first pope, and the sacred authors do not soft-peddle his humanity or his short-coming," the cardinal said.

"I always say, in some ways he reminds me of a mix between Archie Bunker and Ralph Kramden. He's a real mensch of a person."

The cardinal described St. Peter as a fisherman who could never get even that quite right, without Jesus telling him just when and where to cast his net.

Throughout the Scripture, Peter developed into a holy man whose followers rushed to place the sick at the roadside as he traveled, in order to be healed by touching even his shadow.

"John Paul II was the St. Peter of our day," the cardinal said. "I remember the first time that his shadow touched me."

The cardinal spoke of visiting Cuba after Pope John Paul II visited in 1998. He tied the two themes of the Mass into one, as he recounted the pontiff's influence upon those newly called to the collar.

"I was amazed 90 percent of the seminarians were converts, and they attributed their conversion and the vocation to the visit of Pope John Paul to their country."

Founded in 2008, the Serra Club of Boston assists the Vocations Office of the archdiocese to promote and support the clergy as part of an international organization created in 1935. The club draws its name from Blessed Junipero Serra, a Franciscan in the 1700s who promoted Catholicism in the Americas and was beatified in 1988 by Pope John Paul II.