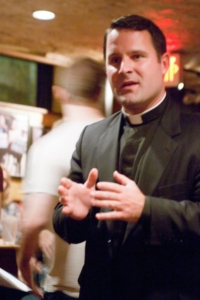 Father Gaspar, co-director of the office of Worship and Spiritual Life for the Archdiocese of Boston, gave a talk about the new translation of the Roman Missal at a "Theology on Tap" gathering in Cambridge Oct. 12. Pilot photo/Justin Bell

CAMBRIDGE -- Father Jonathan Gaspar has given many presentations about the new English translation of the Roman Missal, but never one at a pub.

"So if I seem to be getting distracted, it's because I'm tapping along to the melody upstairs," quipped Father Gaspar referring to the traditional Irish music being played above the reserved room at his Theology on Tap talk at Tommy Doyle's on Oct. 12.

Though Father Gaspar, co-director of the office of Worship and Spiritual Life for the Archdiocese of Boston, seasoned his talk with humor, he gave a historical, theological and passionate presentation about the translation, which takes effect on Nov. 27 for most English speaking nations.

The event was organized by nearby St. Paul Parish, which serves Harvard University students and other graduate students and young professionals in the area.

After defining the missal as the red book of prayers and instructions that a priest uses at Mass, Father Gaspar said these gestures and postures have been used by the Church for centuries.

He then explained how the prayers passed down through oral tradition eventually becoming local liturgical books called sacramentaries. The Council of Trent brought together the sacramentaries and developed the first Roman Missal in Latin, which was used until the Second Vatican Council.

According to Father Gaspar the missal is necessary because when Jesus ordered his disciples to baptize and make disciples of all nations, "He didn't leave them a book with all the prayers."

He also addressed those who thought the timing was off for a new English translation.

"People ask me all the time, 'Why on earth, with everything else that's going on in the Church today, why do this now? Don't we have enough problems? Isn't there anything more important for us as a Church to be focusing on?' And I would say, 'No,'" said Father Gaspar.

"Everything that is at the heart of the Church's apostolic mission, caring for the poor, the sick, educating our young; all of this flows from the contact that we have with God in our sacraments," he explained.

"Sure there are a lot of other things that are also important, but the most important thing that we do as Catholics is to offer worship -- to offer worship to the Father in the power of the Holy Spirit in the voice of his son our Lord Jesus Christ," he continued.

He explained that the 1973 English translation of the missal was based on a linguistic theory called dynamic equivalence that attempted to get to the "gist" of the original Latin. However, he said this method lost much scriptural language and metaphors used by the early Church fathers.

The new translation is based on a theory called formal equivalence that is "not a slavish word for word translation of the Latin, but one which retains the content and the structure of the Latin text," said Father Gaspar.

Using handouts that he distributed to the 25 or so people gathered, he led the group in saying new congregational parts of the Mass and focused on key changes.

Father Gasper said that when the people say this reply to the priest, "they're affirming, they're confirming, they're naming the spirit that he has received in his sacred ordination."

He said that the people's response acknowledges the priest acting in the person of Christ.

Father Gaspar said that the gesture represents the reversal of the practice of stone throwing, by saying to God, "rather than me throw the stone on others, I'm casting the stone on myself. I want that stone to crush out that sin that is in my heart."

This acknowledgement of sin is important because "At the Eucharist itself, God can cast sin out of our hearts" and so as we begin Mass "we submit ourselves to his mercy."

He also called attention to the Gloria where the new translation restores the words of the angels hovering above the new born Christ child in the Gospel of Luke.

"We've been using a translation that changed the words of the angels. The angels will be very happy to hear that we're actually using their words again," said Father Gaspar.

He said that this goes along with the Church's celebration of the Feast of the Annunciation on March 25, nine months before the celebration of Christmas.

This translation affirms that for Christ "his earthly existence begins on the day of his Incarnation, the day of his conception in the womb of the Virgin by the power of the Holy Spirit." This phrasing has "tremendous implications for us in our teaching about the Church's pro-life message."

During a question and answer period, Father Gaspar addressed the problem of prayers being changed by priests at Mass or words omitted by the people.

Father Gaspar affirmed that the missal is "a gift from God through his Church" and even if we don't like the wording "that doesn't mean we can tinker with them."

Father Gaspar did acknowledge "fair criticism" of the translation and that there were parts of it that he did not like. However he said the translation taken as a whole is "very good."

"I'm very, very pleased on how rich the language is and what it offers us," he said.

Tom Fortnam, an electrical engineer, had not heard about the translation change until reading about the pub talk online and called Father Gaspar's presentation "excellent" and "very informative."

"It's interesting just exactly how much thought is put into so few words," Fortnam said.