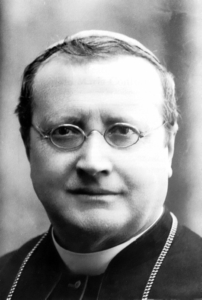 Who could have even imagined that the fourteen young Italian students who began their studies for the priesthood in Parma, Italy on Dec. 3, 1895 would become the seed that produced some 800 Xaverian Missionaries which today labor for Christ all over the world? The drafty, meager home that served as their missionary seminary had been purchased by Father Guido Maria Conforti who was then 30 years old.

From the beginning, however, people seemed to recognize something different, something very special about Father Guido Conforti. Burning with missionary zeal, Conforti dreamed of sharing the Word of God with non-Christian people, particularly in China. With uncommon fervor, he embraced the work of human promotion among the poor, the weak, the oppressed, the unjustly treated, and the outcasts of society.

Two factors prevented him from becoming a missionary himself. To begin with, he was physically frail from a pulmonary disease. Beyond that, the Vatican recognized Father Guido Conforti as a priest of unique talent and elevated him to the status of a bishop which required him to attend to local diocesan duties. Despite his busy schedule, however, he established the Xaverian Missionaries and skillfully guided them through the difficult early years of their work in China from his northern Italian diocese of Parma.

Towards the end of his life Bishop Conforti finally fulfilled a lifelong wish and traveled to China himself to visit his Xaverian Missionaries and to joyfully witness firsthand the many good works they were accomplishing in proclaiming the Gospel. At the time of his death on Nov. 5, 1931, there were already 56 priests, 17 brothers, and 52 seminarians along with another 31 novices preparing for profession into the Xaverian Institute.

Two miracles attributed to him have already been authenticated by the Vatican. Nevertheless, as we look at what Saint Guido Conforti left us, we see untold numbers of miracles happening every day in hospitals, clinics, schools, and social service agencies where the 800 Xaverian Missionaries valiantly labor in Christ's name every day throughout Asia, Africa, Europe, South America, and in the United States.