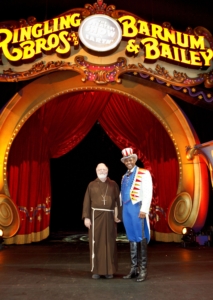 Cardinal Seán P. O'Malley poses for a picture with the ringmaster of the Ringling Bros. and Barnum and Bailey Circus, Oct. 14. Pilot photo/Gregory L. Tracy

BOSTON -- He blessed animals and people, gave out prayer cards, spoke with performers in their native language, but fortunately Cardinal Seán P. O'Malley did not run away with the circus when he visited there on Oct. 14.

Ringling Brothers and Barnum and Bailey Circus recently gave a series of shows at the TD Bank North Garden and Father Gerry Hogan, the national circus chaplain, invited Cardinal O'Malley backstage for a tour. He also helped to arrange a viewing of the evening show for the senior priests and support staff of Regina Cleri, the retirement home for priests of the Archdiocese of Boston.

Growing up in Woburn, Father Hogan never thought he would be a priest, let alone a circus priest. However, one of his neighbors worked for the circus and invited him to shows. He also met and was inspired by a former circus priest, Father Ed Sullivan, who began his ministry in 1935.

Father Hogan is the fourth priest circus chaplain since 1928 and also a co-pastor of St. Michael Parish in North Andover. He started with the circus chaplaincy in 1993, a role appointed by the US Conference of Catholic Bishops.

He estimates that 65 percent of the performers in the circus are Catholic, many coming from Latin and South American, and countries from Europe. Though he travels sometimes with them, much of his work is done with different circuses that pass through Boston and the East Coast.

Father Hogan administers different sacraments, visits injured performers in hospitals and also counsels the workers with different issues, including not getting a contract renewed. He also tries to break down preconceived notions.

"They're just like you and I, except they travel. And they have this mystery that they're odd and they're different. It's a prejudice like gypsies, tramps, and thieves -- they come and go into the night," said Father Hogan.

Father Hogan's brother priests and the support staff from Regina Cleri appreciated the show, enjoying traditional circus spectacles such as the ringmaster, seven motorcyclists in a steel globe, a tamer surrounded by tigers and trapeze flyers -- among other attractions during the two-part extravaganza accompanied by almost constant music and noise.

Father Joe Fagan, 71, had not been to the circus since he was 6 and his father took him after World War II in 1946.

"I think it's wonderful, it gives a family a chance to relax and everybody is equal here, we're all children here," said Father Fagan.

Father Paul Mulligan, 80, also remembered the circus as a youth and 30-40 people emerging out of a little Volkswagen car. He said Friday's circus was a little noisy for him, but also that "it was great in the sense that it kept everybody going, you know well planned."

The circus workers also enjoyed the visit and the special experience of meeting Cardinal O'Malley. One of the performers that Father Hogan introduced to the cardinal was Ivan Vargas, 21, who is currently an acrobatic clown. Vargas was born while on the circus tour in Madison, Wis. and has been with the show his entire life. His parents are from Mexico, his mother a fourth generation circus worker and his father a fifth generation one.

"The circus is magical, it's a beautiful place, but it gets tough because one tour is two years long and every week we travel to a different city," he said.

Even though the circus is home to over 25 different languages, Vargas sees the circus as a family. This is important because "the closer we are together, the stronger we can be as a unit to put on the greatest show on earth."

"It's just one giant melting pot of cultures, religions, races, anything. It's actually a beautiful thing," he said.

For him the goal of the show is to let people relax, enjoy and "if it's just one person we can inspire out there, then we've done our job."

Cardinal O'Malley also met Sandor Eke, 36, the "boss clown" of the show. From Hungary, Eke also comes from parents who worked in the circus. In the last year, he has studied with Sister Dorothy Fabritze, one of the two religious sisters who travel with and minister to circus personnel.

"It's helped me to be a better, nicer and calmer person," said Eke about his studies.

He also said he has been praying a lot more for the people who are injured and making extra efforts to see that they are OK.

Victoria Zsilak, also from Hungary, is a mother of two, a juggler in the circus, and a third generation worker. Her 14 year old son is learning acrobatics and she is teaching him to juggle. Her daughter, 6, is also studying acrobatics and ballet. Zsilak sees herself working for the circus in the long-term, and also described how God works in her life in the circus.

"It's a lot of drama in the circus, it's a lot of drama; a lot of people, you know, want bad for you. And you always see the good coming into you. That's how I feel you see God, you know? And always the people who do bad for you they always end up in some problem of their own. So I think there is a God and I believe in it," she said.

Ivo Silva Jr, 23, a circus flyer from Brazil, considers his life "totally different" from a "normal" one. He believes God is with him in whatever he is going to do. When asked if he would ever tire of the circus -- a place he has also been with his whole life -- buy a house and settle down, he said "never" repeatedly.