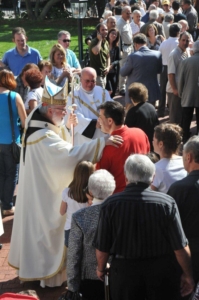 'On Sunday (10/9), I went to St. Leonard of Port Maurice Parish in the North End for the 150th anniversary of the founding of the modern Italian state.' Pilot photo/CardinalSeansBlog.org

Among the new forms of consecrated life that have been restored in the Church after the Second Vatican Council, we have that of the hermits. These are men and women who make vows of poverty, chastity, and obedience and follow a rule of life that commits them to a very intense life of prayer and service, particularly works of mercy. On Friday (10/7), I was pleased to preside at the profession of our latest hermit, Mary Therese Inoue. Mary Therese has been prepared for a long time by Sister Marian Batho and by her work with the Oblates of the Virgin Mary. Many of the Oblates were there and concelebrated the Mass. Some members of her family were with us, as well.

Also on that day, I celebrated the funeral Mass of Msgr. Stanislaus Sypek, who was the pastor of St. Adalbert Parish in Hyde Park. Msgr. Sypek was among the last group of priests ordained during Cardinal O'Connell's era. He was 96 years old and was still an active pastor of St. Adalbert's, which is a Polish national parish. He had been a personal friend of Blessed Pope John Paul II and a great leader in the community and was among the last pastors appointed by Cardinal Cushing in 1969. He was a very accomplished man; he had two doctorates. He was originally from New Bedford, but his family moved to South Boston. He was well known for all of the aid that he acquired and transmitted to the Church in Poland, as well as supporting orphans in the Holy Land.

On Sunday (10/9), I went to St. Leonard of Port Maurice Parish in the North End for the 150th anniversary of the founding of the modern Italian state. St. Leonard's is one of our Italian parishes and the church was very well attended and they had a beautiful choir. ...The Italian Consul-General, Giuseppe Pastorelli, was there with his wife and his young son. There were also a number of young Italian student-immigrants, as well as many of our people from the local Italian community of Boston. I pointed out that Massachusetts has the 6th largest Italian-American population in the United States and they are a very important part of our local church. We're very pleased to be able to congratulate them and celebrate this birthday celebration of the Italian state.

Meeting with bishops of the Boston Province

On Wednesday, I met with the bishops of the Boston Province. This time we had two new bishops with us. Bishop Peter Libasci of Manchester, N.H., who will be installed on Dec. 8, came to join us for the meeting. It was a wonderful opportunity for him to meet all of the bishops of the province. We had the new Eparch of the Melkite Diocese in Newton, Bishop Nicholas Samra, with us as well. He replaced Archbishop Cyrille Bustros, who is now the new Archbishop of Beirut, Lebanon.