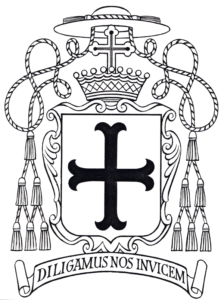 Father Cheverus lived in England from 1792 to 1796. When he arrived, he did not speak English. The English government had a program to assist all those who were unjustly persecuted and exiled from France and Father Cheverus was offered financial assistance. He refused the assistance, asking that it be given to those in greater need, stating that once he learned English, he would be able to earn a living. In January 1793, Father Cheverus knew English well enough to obtain a position teaching French and mathematics in a boys' school. This position gave him the opportunity to perfect his command of English. Once assured of his facility in English, he presented himself to the vicar apostolic of the London District, asking to be allowed to engage in pastoral ministry. Having assured himself of Father Cheverus' linguistic abilities, the bishop agreed to his request.

Father Cheverus found several non-practicing Catholic families who lived near him and brought them back to the practice of the Faith. Soon he found that he needed a chapel to accommodate the increasing numbers attending Mass. He was able to procure both a chapel and a clergy residence and the vicar apostolic, Bishop Douglas, came in person to bless them.

In 1795, he received a letter from Father Francis Anthony Matignon, a former professor at the Sorbonne, who was pastor in Boston and was responsible for all of New England and the Indian tribes. His former professor invited him to come to Boston to assist him. Father Cheverus wrote to his bishop who feared that if he went to the United States, he would never return to his diocese.

Having decided to join Father Matignon in New England, he obtained passage on a ship destined for Boston and arrived on Oct. 5, 1796. He was greeted with joy by Matignon who immediately wrote to Bishop John Carroll, requesting faculties for Father Cheverus, and enclosing testimonial letters from the bishops of Dol and Le Mans which attested to the exemplary life and ministry of Father Cheverus. Bishop Carroll immediately granted all the faculties necessary for him to carry out his ministry. He thus joined Father Matignon in a missionary field which encompassed all of New England including the Penobscot and Passamaquoddy tribes.

As we know from many excellent sources, ministry was difficult and at times dangerous due to the strong anti-Catholic prejudices held by the populace. Fathers Matignon and Cheverus, wishing to combat these prejudices and change the hearts of those who held them, believed that by living their lives in evangelical simplicity, they could break down the preconceptions held by so many. Their unselfish ministry and love of neighbor changed many hearts and minds. One notable event was the building of a new Holy Cross Church. The congregation had outgrown the church on School Street and a committee of local Protestants headed by John Adams donated a significant amount for the construction of the new church. The new church was dedicated by Bishop John Carroll on Sept. 29, 1803.

His priestly ministry in New England provides many examples of his love of Christ by his service to others. Notable among them are the following three: his journey to Maine to visit the Penobscot and Passamaquoddy tribes where his simple lifestyle and his facility in learning languages contributed to the success of his ministry; his selfless ministry to the sick and dying during the yellow fever epidemic of 1798; and his correspondence with Elizabeth Ann Seton which contributed to her decision to found the Sisters of Charity to serve the sick and poor.

In 1801, Napoleon Bonaparte concluded a concordat with Pope Pius VIII, allowing the exiled bishops and priests to return to France. Father Cheverus' family and friends urged him to return to Mayenne. He was deeply troubled by the decision he was being asked to make and asked Bishop Carroll's advice. Bishop Carroll's reply, which was in favor of him remaining in the United States, influenced his decision to remain in Boston.

The Church in the United States was growing and Bishop Carroll requested that the Holy See divide the Diocese of Baltimore and create four new dioceses: Boston, Bardstown, New York, and Philadelphia. At first he was inclined to recommend Father Matignon to be the first bishop of Boston, but Father Matignon's reluctance to accept a possible nomination combined with the state of his health and his own recommendation of Father Cheverus for the position led to Bishop Carroll requesting the nomination of Father Cheverus.

On Nov. 4, 1810, Bishop Cheverus assisted Archbishop Carroll as a co-ordaining bishop along with Bishop Egan in the episcopal ordination of Bishop Benedict Joseph Flaget, PSS, of Bardstown.

For the next twelve years, Bishop Cheverus worked diligently to build up the Diocese of Boston and he worked with his brother bishops to advance the evangelization of the country. For the first five years of his episcopacy, he was also responsible for the Diocese of New York as apostolic administrator. He and Bishop Joseph-Octave Plessis of Quebec cooperated in the evangelization of the contiguous areas of their respective dioceses.

On Dec. 14, 1817 in Saint Peter Pro-Cathedral in Baltimore, Bishop Cheverus conferred episcopal ordination for the first time, ordaining Father Ambrose Marechal, PSS, as the second Archbishop of Baltimore. He was assisted by Bishop John Connolly, OP, of New York, and Father Louis de Barth of Philadelphia.

On Jan. 13, 1823, King Louis XVIII of France proposed Bishop John Cheverus to the Holy See to be the next Bishop of Montauban. Bishop Cheverus intended to decline the nomination but was informed that he would incur the king's displeasure if he were to refuse it. In a letter to a close friend, he wrote that his "departure from Boston was looked upon as a public calamity." (Records of the American Catholic Historical Society of Philadelphia, v. 12, p. 361).

Bishop Cheverus arrived in Paris in November 1823 and was appointed Bishop of Montauban by the Pope on May 3, 1824. He made his solemn entry into that city on July 28th of that year.

Within one month of his transfer to Montauban, he was a principal co-ordaining bishop of the famous Bishop Forbin-Janson. During his episcopate in Montauban, he published a catechism and re-established the major seminary.

On July 30, 1826, the king presented him to the Holy See for promotion to the metropolitan see of Bordeaux, which carried the title of Primate of Aquitaine, and the Holy See made the official nomination on Oct. 2, 1836. Archbishop Cheverus received the pallium on Dec. 6th of that year and took possession of his see on Dec. 14th.

On Nov. 5, 1826, he was named Count and Peer of the French Kingdom. He declined the position of minister of Ecclesiastical Affairs offered by King Charles X of France but he was named Counselor of State in November 1828 and Commander of the Order of Saint-Esprit in 1830.

His episcopate at Bordeaux was noted for his promotion of charitable works and his support for the establishment of Catholic schools. During the cholera epidemic of 1832, he turned the episcopal residence into a hospice. In late 1833, he ordained three French bishops.

Archbishop Cheverus was created cardinal by Pope Gregory XVI, at the request of Louis-Philippe, during a secret consistory held on Feb. 1, 1836. Cardinal Cheverus received the cardinal's biretta from the hands of the king in the chapel of the Tuileries on March 9th, but he before he could go to Rome to receive the red hat and a cardinalatial title, he died as the result of a heart attack on July 19, 1836. His funeral took place on July 26, 1836 and he was buried in the metropolitan cathedral of Saint-Andre.

Cardinal Cheverus' life and ministry beautifully demonstrated his living out of his motto, ''Let us love one another.''