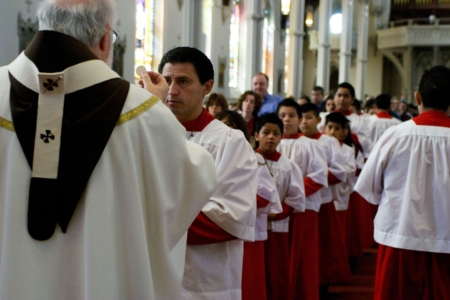 SOUTH END -- Despite an army general ordering everyone out of Mass during the so-called "Dirty War" in Argentina, an altar server stayed with Cardinal Seán P. O'Malley, who was then a young priest. The cardinal suggested that the young man -- who was also a soldier -- leave, as it was a dangerous scenario.

"No 'padre,' I'm going to stay and serve this Mass," the cardinal recalled the young man saying.

Cardinal O'Malley told the story during his homily at the annual Altar Server Appreciation Mass that brought over 450 altar servers of the archdiocese to the Cathedral of the Holy Cross on Oct. 15. The cardinal called the Mass in Argentina one of his most dramatic as a priest. During his homily he was addressing human rights abuse by the military when the general gave his order.

"It put me in mind of what Jesus says in today's Gospel, 'Everyone who acknowledges me before others, I will acknowledge them before the angels,'" said Cardinal O'Malley.

The cardinal also spoke of the Apostle John as being the first altar server, having prominent roles at the Last Supper and at the Crucifixion of Christ, events that are present in the Mass.

He concluded his homily addressing the altars servers present at the Mass.

"I congratulate you for saying 'yes' to inviting Jesus in a special way into your life. And I urge you to continue to cultivate, in your life, a love for the Eucharist, a love for the Mass. Make it a central part of your life, it will be a compass that will lead you to God and help you to always have the strength to lead a good life. Help others to discover the beauty of the Mass and God's love."

After the homily, the cardinal led the altar servers in a rite of commissioning and blessing. The servers pledged to show reverence in their duties, develop their Christian life through prayer and service, grow in devotion to Jesus in the Eucharist, and strive to be a good example to their peers and assist the other servers at Mass.

After the Mass, Jolo Barcinas, 12, from St. Elizabeth of Hungary Parish in Acton commented about being an altar server. He picked up a Blessed John Paul II Award.

"It's really fun and it's a privilege to serve God and worship him," said Barcinas.

Jolo is considering being a priest or a cook or playing basketball when he is older.

"I've learned how important the Mass itself is and I feel that by altar serving I get, like, a better experience at Mass," said Tobin explaining the participation is more involved than sitting and watching.

Tobin plans to attend college and would like to study broadcasting and communications. She would also like marry and start a family.

The Altar Server Appreciation Mass is organized by the Vocations Office for the Archdiocese of Boston.