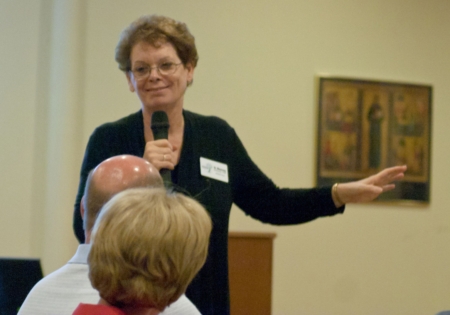 NEWTON -- Sister Maureen Colleary of RENEW International told a group of parish leaders gathered Oct. 11 at Our Lady Help of Christians Parish in Newton that the bedrock of the preparation for the "Why Catholic?" program, which will be starting this upcoming Lent in the archdiocese, is prayer.

"Even though you're doing the work and the planning and the inviting and the organizing and the publicity, but you need to know that at the heart of it -- is prayer and faith sharing," said Sister Maureen.

"Why Catholic?" is the latest adult faith formation program brought to the archdiocese by RENEW International, the group that designed the "ARISE Together in Christ" program specifically for the Boston Archdiocese. The program met with success here, impacting around 30,000 people in each of its three years-- beginning in the fall of 2008 and concluding last spring. ARISE has since been implemented by other dioceses.

According to the archdiocesan Office for Worship and Spiritual Life that facilitated the program, ARISE was at 180 parishes at one time, though it had expanded also to prison groups, schools and assisted living complexes.

"Why Catholic?" will be a 48 session program spread over four years based on the four pillars of the Catechism of the Catholic Church: Prayer, Profession of Faith, the Sacraments, and Life in Christ. Small groups will meet in six-week increments, in homes or at the parish, led by leaders or facilitators with the aid of books provided by RENEW. The five elements of the program are: prayer, learning, faith sharing, mutual support, and mission.

There is a $1,100 flat fee for parishes participating in the program. According to Ann Cussen of the Office for Worship and Spiritual Life, there have been benefactors coming forward to help some parishes. Parishes and participants do not have to start the program at the beginning of the four-year cycle.

Many of the 25 participants attending the Oct. 11 meeting with Sister Maureen at Our Lady Help of Christians Parish had been involved with ARISE in their parishes. Sister Maureen -- who belongs to the Franciscan Sisters of Peace -- has worked with RENEW for 15 years and said that knowledge of the faith is "pretty slim" in the last couple of generations.

She said in the past the faith was taught more in a rote style. Instead, the model of "Why Catholic?" is based on small communities where adults share their experiences.

"And now in my own journey of maturation in the faith, I can sit and talk about the 'why' because I've lived through some stuff and I know it, as can all of you," said Sister Maureen.

The sister also mentioned that Catholics can get hung up on the word "evangelization" associating it more with Protestant practices. She said people often believe they have to convert others.

"It couldn't be further from the truth. Vis-a-vis evangelization, our job description is around welcoming, inviting, and sharing our stories," said Sister Maureen.

"The job description of the Holy Spirit is changing people's hearts," she added.

Sister Maureen led a workshop with the participants to identify who their target audience is, what is important to them, where they are located, and who -- from the parish team -- will ask them to join a small group. Some target audiences she mentioned were: moms that drop their kids off at CCD and go to Starbucks, lapsed Catholics and those who sit in the back row at Mass and leave after Communion.

She told The Pilot that it is part of Catholics' baptismal call to transform the world and that it is an essential part of the Gospel.

"Well, we can only do that one person at a time, in our own sphere of influence. So we pray together, we are strengthened by these small communities and then we go out and we try to make a difference in the world by living Gospel values," said Sister Maureen.

Bruce Holbein, 63, of Corpus Christi-St. Bernard Parish in Newton, became Catholic four years ago. He said that faith sharing in ARISE was a "wonderful experience" and "really cemented me in the community of the Church."

Holbein said that he is excited that "Why Catholic?" is based in the catechism and will continue the faith sharing format of ARISE. His small group from ARISE still meets, but he said they are looking forward to the structure and guidance of the new program.

Valerie Brauer, 42, led an ARISE group for all three years that the program was at her parish, Saint Joseph-St. Lazarus in East Boston. She said that her small group had senior citizens, younger people, singles, and married people.

"I came with the intent of getting motivated to get this done, because I'm so excited about it, just the little bits and pieces that I've gotten from some workshops from the ARISE group that-- this is what I want, I want to know why I'm Catholic," Brauer said about attending the meeting.

"And I know there's so many people out there that are feeling the same way I am, like 'OK we're Catholic, but what does that mean?'" she added.

She said that along with people in her parish, she would like to reach out to friends who have stopped going to church and who are not bringing their kids.

"You get to a point where you haven't been to church in so long, you feel kind of funny walking through those doors," said Brauer.