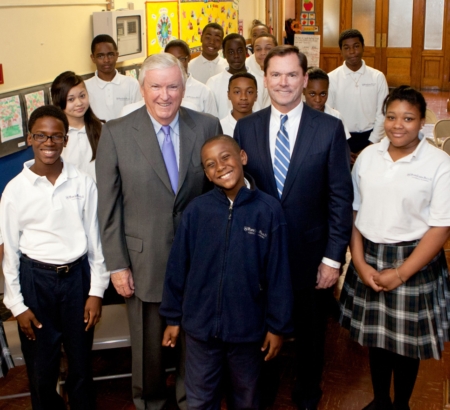 BRAINTREE -- The Campaign for Catholic Schools announced Oct. 12 that it has been awarded a $1 million grant for Pope John Paul II Catholic Academy by the State Street Foundation, the grant making arm of State Street Corporation. Headquartered in Boston, State Street is one of the world's leading providers of financial services to institutional investors.

The grant, announced at the Dorchester Lower Mills Campus, will be used to benefit middle school programs and professional development at the academy.

"We are grateful to State Street for its very generous gift which will benefit Pope John Paul II Catholic Academy," said Cardinal Seán P. O'Malley. ''This level of support, coming from a financial institution that is a leader in our local community, will allow us to build on the success that has been achieved at the Academy in recent years."

"We are pleased to award this grant to the Pope John Paul II Catholic Academy," said State Street's chairman, president and chief executive officer Jay Hooley. "Building a better world through education is core to what we do at the Foundation and is the primary focus of our Global Giving campaign. This grant will help to provide the teachers at the Pope John II Catholic Academy with the support, training and tools they need to do their best work for their students."

Pope John Paul II Catholic Academy is a Pre-K through Grade 8 school that opened in September 2008. It is located on multiple campuses in the Dorchester and Mattapan neighborhoods of Boston.